But as this shades into politics, I’m not tagging it for SFWA’s twitter feed.
Wright’s thesis is that beauty uplifts the soul, but modern art has rejected objective standards of beauty and therefore sucks. And this is part of the left-wing attack on America because it weakens the human spirit and gives power to the oppressor: “Imagine two men: one stands in a bright house, tall with marble columns adorned with lavish art, splendid with shining glass images of saints and heroes, mementos of great sorrow and great victories both past and promised. A polyphonic choir raises their voices in golden song, singing an ode to joy. The other stands in a slum with peeling wallpaper, or a roofless ruin infested with rats, hemmed by feces-splashed gray concrete walls lurid with jagged graffiti, chalked with swearwords and flickering neon signs advertising strip joints. Rap music thuds nearby, ear-splitting, yowling obscenities. A bureaucrat approaches each man and orders him to do some routine and routinely humiliating task, such as pee in a cup to be drug tested, or be fingerprinted, or suffer an anal cavity search, or surrender his weapons, or his money, or his name. Which of the two men is more likely to take a stand on principle not to submit?”

Oh, and we leftwingers also object because ” To have taste implies that some cultures produce more works of art and better than others, and this raises the uncomfortable possibility that love of beauty is Eurocentric, or even racist.”

Having spent several hours in Boston’s Museum of Fine Art I can safely say that love of beauty has nothing to do with European culture. Check out Egypt. Or below, Iraq (from centuries past) and Japan. 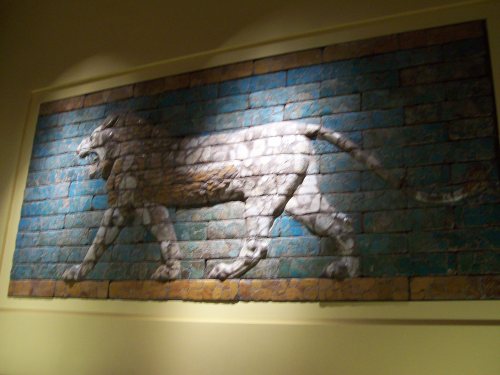 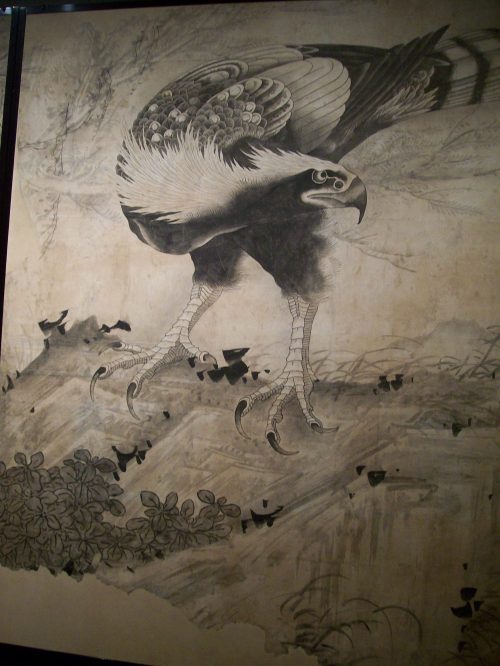 He also brings up Marcel Duchamp’s notorious placing of a urinal in a museum. But Duchamp wasn’t holding it up as an example of beauty, he was making a point about how placing something in a museum automatically makes us see the item differently—even a urinal.
Now, as for his specific example of the two individuals, I agree they might have a different reaction. But that’s going to be because the guy in the fancy house is apparently a wealthy, powerful man (judging from his house) with the attorneys to stare down crazy government demands. The poor man in the gutter doesn’t have that option and quite possibly he’ll need to be drug-tested to qualify for unemployment or food stamps (something conservatives are very keen on. Whereas if the guy in the beautiful house were a government contractor with a million-dollar deal, they’d be outraged at the idea of testing him).
Nor have I noticed much conservative enthusiasm for, say, funding museums so poor people can get in cheap or free (Boston MFA is $25 a pop). Or in general doing anything to help the poor person (who you’ll note is surrounded by rap music. Dang, it’s almost like Wright is implying the person is not er, Eurocentric). Or even working on giving us a functional economy.
More generally, Wright’s argument that lefties are all anti-beauty seems based on nothing but stereotypes. As the excellent art history Visual Shock points out, the New Deal promoted a lot of attractive public art. Stalin despised modern art, as did Hitler. The Vietnam Wall, I think has an undeniable beauty but it was condemned by a number of conservatives. Art doesn’t track politics terribly neatly.
I’d argue with his views on art more generally, but I’ve better things to do (there’s plenty of discussion in the comments at the link, which is not directly to Wright). So I’ll link to another post ripping into Wright’s advice on great sex:
•Me Tarzan. You Jane. If Tarzan not dominant, sex bad. Wives want to submit to their husbands, honestly.
•Using birth control means it isn’t real sex.