Okay, not ten days. But we did put in a lot of time in the Boston Museum of Fine Art and still didn’t see all of it.
The first trip was the Saturday of our vacation. I’d emailed some friends of mine who live outside the city (one about two hours away, the other two maybe a half-hour) and to my delight, they were able to schedule with us.

The Museum is awesome. In addition to the stuff I posted yesterday we saw Hittite cups

And some antique instruments— 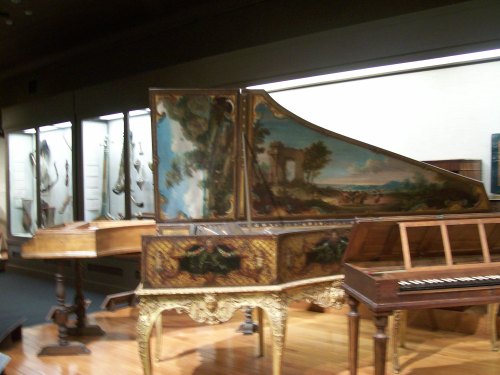 And that’s not even counting the paintings. As TYG says, it’s the kind of museum where a Botticelli that would be highlighted and trumpeted in a smaller museum just sits on the wall in a hallway (below) 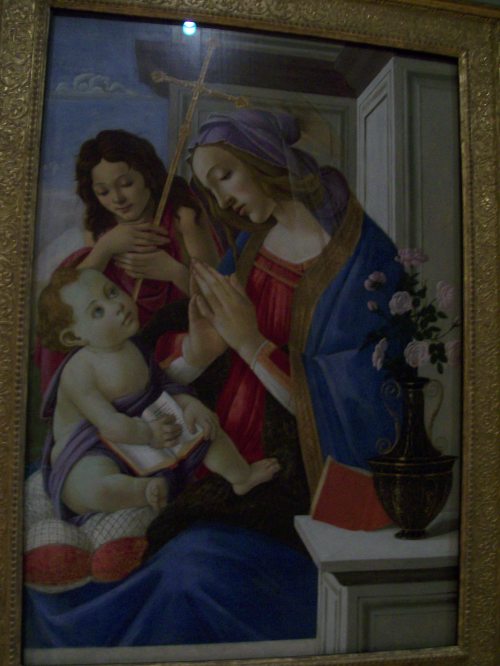 We also hit the Isabella Gardner Museum, which regrettably didn’t allow photographs. It’s an old house stuffed with Ms. Gardner’s private collection which includes paintings, antique gold work, tapestries, sculpture and a Titian painting that really impressed TYG (she has an art history minor). Oh, and a sedan chair, the first time I’ve ever seen a real one. There were also several blank frames, the paintings stolen around 20 years ago; apparently Gardner’s will says they can’t change the collection so there’s no replacing the pictures or moving the frames.
We also hit the Museum of Science which was a bit of a disappointment: TYG had guessed it might bea little too kid-centric, and she was right. 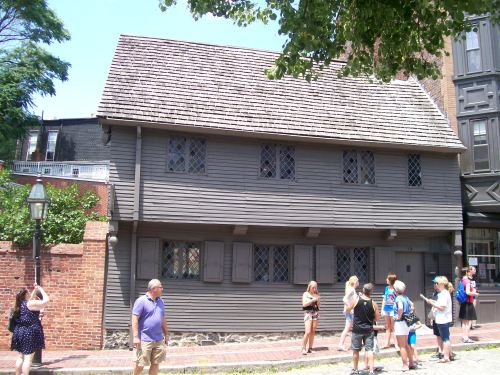 Beyond that, we also visited Boston Commons and the neighboring Public Garden (very beautiful) and walked part of the Freedom Trail. This is a path (marked out in red brick on the sidewalk) that leads to various famous Revolutionary sites: The Boston Massacre, Faneuil Hall, Paul Revere’s house (above), a couple of famous churches. We got as far as the North End, the Italian neighborhood of Boston. We had lunch at an Italian restaurant and it was excellent. However I was too darn full to eat a cannolli (I’ve heard they’re excellent in that neighborhood).
We also walked through graveyards with various 1700 celebrities such as John Hancock buried there.

Plus we took the “duck tour,” a ride on an amphibious vehicle. It goes up various streets showing some of the prominent landmarks (lot of overlap with the Freedom Trail) and then out onto Boston Harbor. It was a blast.
And then Thursday we left early in the morning. And came home with lots of photos and some awesome memories.

2 responses to “Boston, continued: Ten Days in the Museum (#SFWApro)”