From WW I to WW II: books

A PEACE TO END ALL PEACE: The Fall of the Ottoman Empire and the Creation of the Modern Middle East by David Fromkin shows how the roots of the conflicts continuing to tear apart the Middle East go back to the misconceptions of the Allied Powers in the Great War: that the Young Turks who’d taken over the Ottoman Empire were puppets of Jewish interests; that if Britain controlled the caliph of Islam, they’d control the tnire region; and so on. The officers on the front lines made their own share of errors: Fromkin concludes the Navy could have taken Constantinople and avoided the disastrous Gallipolli campaign but the commander got cold feet and decided to wait for the Army instead.

The end result? A longer war, a badly designed peace and a failure to enforce the peacetime settlement Europe wanted due to a reluctance to keep a massive presence in the area (though our own occupation in Iraq shows that a heavy occupation force might not have been a game changer), feuding among the allies, resistance among men in the field (a lot of British officers opposed England’s support for a Jewish homeland in the region) and continued misunderstanding (David Cannadine’s Ornamentalism discusses a lot of the same misconceptions). Dry and very detailed, but interesting.

MURDER BY MATCHLIGHT by ECR Lorac is one in a long mystery series about Det. MacDonald, this one taking place during the London Blitz. The strike of a match in the pitch darkness draws the eye of one witness to a murder; MacDonald investigates the case which involves a silent killer, a number of show folks and and Irishman who faked his own death. This is too old-school for me, with lots of reconstruction of people’s whereabouts on the night of the murder and a long and rather dull explanation of the case at the end. Where it stands out, though, is the backdrop: houses destroyed, people fleeing bombings or displaced by them, entire blocks gone, and the fatalistic acceptance of it all (in a tone distinctly grimmer than the stereotypical Stiff Upper Lip).

Reading that prompted me to check out Connie Willis’ BLACKOUT and see if the complaints about how she treats the death and disaster of the Blitz as an amusing theme park were valid. After reading the book, I think they’re codswallop: the various time-traveling historians do find some fun in their journeys but there’s also death, destruction, fear and desperation. That said, I found it a very dull book, closer to a historical slice-of-life than anything else. That would have worked at 300 pages, perhaps but at 500 it just drags on too long with not enough narrative spine to support it — and there’s another volume behind it to wrap up the story (it shows my lack of enthusiasm that I settled for reading the synopsis on Wikipedia).

As none of the covers of this week’s reading grabbed me, here’s a Joe Kubert cover from a WW II story instead. 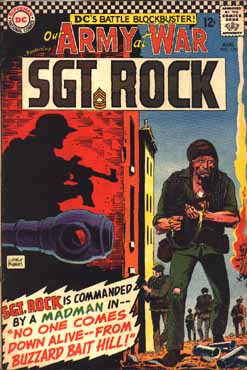