On Monday I discussed the theory of some conservatives that the lower classes should be constantly afraid. That the problem with having a social safety net is that it allows people to engage in unapproved of behavior because they’re not at imminent risk for catastrophic loss. 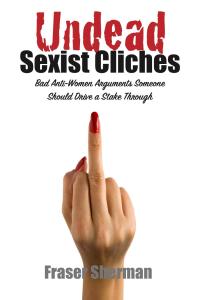 Then I got to thinking how much that explains about the attitudes I wrote about in Undead Sexist Cliches. Time and again, the right-wing solution to things like divorce, women who don’t marry (a big problem in their worldview), rape and unplanned pregnancy is to make women who reject their destiny to be stay-at-home mothers as miserable as possible.

It’s documented that abstinence-only sex ed doesn’t do shit to stop teenage abortions or pregnancies, while birth control and comprehensive sex ed does. Nevertheless, for all their claims abortion is a modern Holocaust, Republicans would sooner restrict access to birth control, maximizing the risk to women who have sex before marriage, than do anything effective to prevent unplanned pregnancy (obviously some married couples don’t want kids either, but forced birthers prefer to ignore that). Like their view of the social safety net, it makes too easy for women to have sex they don’t approve of. Much better, according to Jeb Bush, to slut-shame single mothers.

As right-wingers prefer women staying at home with the kids, a lot of them don’t support protection for pregnant workers. If your boss discriminates, why not quit? Their solutions to rape or harassment are never to protect women; they prefer women assume responsibility for living in ways that (supposedly) protect them, like following the Pence Rule — never mind how it hurts their careers. The Wall Street Journal’s in-house misogynist, James Taranto, thinks the solution to single-parent families is making it legal to discriminate against women in work — then more of them will have to stay married to support themselves!

It’s the Risk is Good approach coupled with patriarchy. No surprise it stinks.