The shape of Things to come

For my ET monster chapter, I think I’m going to go with 1951’s THE THING FROM ANOTHER WORLD, JOHN CARPENTER’S THE THING (1982) and the 2011 prequel that mashes them both together.

The seed of them all, of course, is John W. Campbell’s 1938 short story “Who Goes There?” This opens with a crew of scientists at an Antarctic research base debating whether to defrost an alien body they’ve found in the ice (Alec Nevala-Lee later unearthed an earlier draft that starts with the discovery of the ship). They’re confident the alien can’t still be alive, but they’re wrong. Now they have a shapeshifting creature lurking among them, able to kill and replace any of their sled dogs or themselves. If it escapes, it can populate the world with itself, much as Jack Finney’s pod people). Can they find the duplicates first?

This is part of a long print tradition pitting humans against a superhuman alien threat. It was a nail-biting thriller the first time I read it and would probably be again if I wasn’t thinking critically foremost. I can’t help noticing its very heavy on dialog, much more than action or even movement — like the recap of the opening discovery, it’s more people talking about what’s happening than it actually happening. It has a larger cast than the movie adaptations, but there’s logic to that; more people means Campbell can have a high body count and lots of takeovers and still end up in a better place than the end of the 1982 film. The story is also an excellent example of the Othering I’ve noticed in alien invasion movies. There’s no suggestion the alien might be reasoned with or negotiated with. Just looking at its face convinces most of the scientists it’s innately evil. All of that said, let’s move on to the movies — 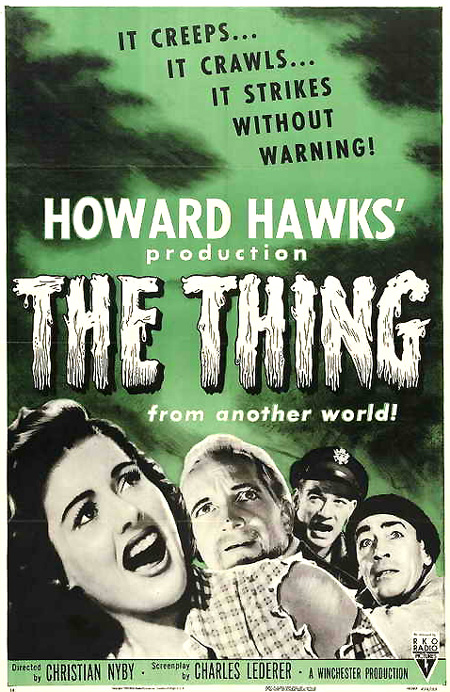 THE THING FROM ANOTHER WORLD is an alien invasion movie, a horror film (it will probably go in my Monsters chapter) and a story of tough guys fighting alone and under pressure, a staple set-up for producer Howard Hawks (while Christian Nyby got the director credit, multiple accounts credit Hawks as the guiding hand). There’s constant banter and crackling dialog (I disagree with Nevala-Lee that the film is mostly “a series of images“), and a woman, Nicky (Margaret Sheridan) who can hold her own with the men. She isn’t the screamer of the poster though she doesn’t get much to do in the struggle.

USAF Captain Hendry (Kenneth Tobey) and his crew fly up from Anchorage to help out Carrington (Robert Cornthwaite) whose science team have discovered a flying saucer that recently crashed in the Arctic ice. Attempting to melt the ice with thermite destroys the metal of the ship, but it turns out the pilot ejected before the crash. Trapped in a block of ice, he gets taken into the lab — and due to an error, the ice melts. The creature is loose. Can Hendry and his men stop it? Can he and Nicky get over their really disastrous first date?

Rather than a shapeshifter, the monster is just a Frankensteinian-looking James Arness. He’s an intelligent plant (“You sound like you’re describing a super-carrot.”) who feeds on mammal blood. His plan is apparently (he never actually talks) to use blood of living creatures to grow seeds and colonize Earth. He shows little concern for humans; as Carrington puts it, he’s no more interested in a dialogue with us than we’d have a discussion with a cabbage.

Despite that insight, Carrington comes off a nasty piece of work. Like Zellerbee in Village of the Damned, he respects the alien’s superior intellect and doesn’t want it harmed. Unlike Zellerbee and similar movie scientists, he actively undercuts the fight, interfering with some of the men’s efforts and providing blood to grow new seedling Things. He’s often been interpreted as Communist figure (ruthless, emotionless, threatening the good people of the world). However, as Keep Watching the Skies points out, the military high brass take the same view that Hendry should avoid hurting the alien. The cluelessness of military higher-ups is a running gag; it’s the people on the front lines who see things clearly (a right-wing film by Peter Biskind’s standards). The film is tense, scary and deserves its rep as a classic  (I’m amazed the best DVD I could find isn’t full of special features). “I doubt the thing can die as we understand dying.”

JOHN CARPENTER’S THE THING (1982) harks back to Campbell’s original by making the monster a shapeshifter. We open 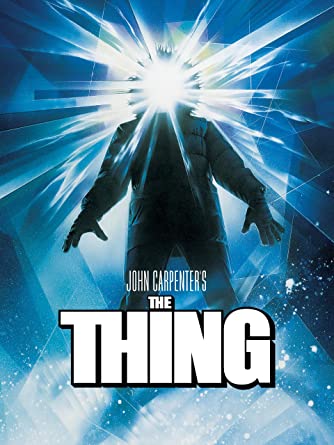 with a husky fleeing a Norwegian Antarctic base, a Norwegian following, trying to kill it from a chopper, only to crash and die. By the time the American base — where staff include Kurt Russell, Donald Moffatt and Wilford Bromley — realize what they’re dealing with its too late: any one of them could have been infected and transformed. Who’s who? Can they figure it out before the monster gets away and infects civilization?

This got a resounding critical slapdown when it first appeared: gory and graphic (the transformation scenes, probably influenced by Alien, are pretty gross), the men’s casual drug use, the fact it’s an all-male cast. Forty years later, it’s become a classic; as Nevala-Lee says, it’s probably better known than the Campbell story. While I prefer the Hawks, the 1982 movie is a solid horror film though it suffers the common logic gaps of the genre. There’s no real attempt to watch each other and ensure they’re not turned, nor do they try grilling each other for memory gaps (maybe the Thing duplicates memories, but they don’t even try). That said, I think Carpenter, a big fan of the original, did a good job. “The chameleon strikes in the dark.”

THE THING (2011) is an attempt to hybridize the two films by remaking the Hawks version and setting it up as a prequel to the Carpenter. Scientist Mary Elizabeth Winstead travels to the Norwegian base where they’ve discovered a ship in the ice, and the ice-preserved body of the pilot. Once again it thaws out; once again a scientist suggests they keep it alive, even as it’s killing them, but now there’s the added possibility it could be any one of them.

This one didn’t work for me at all. It has none of the wit and rough humor of the Hawks version, nor the horror of the Carpenter, even with louder, more graphic F/X. It doesn’t help that we know how it’s going to end, but they fudge even that — Winstead survives almost to the end but we never actually see the Thing take her down. My biggest take away is how determined Hollywood is to keep mining its intellectual property over and over (pre-pandemic, there was talk of remaking the Carpenter version). As I mentioned five years ago, it’s true Hollywood has always been into remakes, and it’s also been into series, but it’s much worse now. Strip-mining old movies is both safe (they’re a known property) and economical (why buy something new when you already have the rights to something old?). Of course the box-office flop of this film shows remakes/prequels/reboots aren’t a sure thing, but I doubt that will shatter the paradigm.  “This may be the first and only time Earth has been visited by an alien life form.”

5 responses to “The shape of Things to come”