Back last year, I decided that I was only reviewing one or two movies per chapter for Alien Visitors — one alien invasion movie, one aliens-and-kids film, one alien-pregnancy film — I wouldn’t have to watch as many as I have for my past books. As you’ve noticed if you read this blog, I’ve been watching quite a few.

The trouble is, I can’t place a movie in its subgenre without some sense of the genre, and simply going by memory isn’t enough. For example, watching Independence Day shows me alien invader movies still use the “look, they’re coming in peace … oops” trope as War of the Worlds  (Mars Attacks! did the same). And it showed me how modern F/X makes it possible to create nonhuman aliens — but also to add tentacles and protuberances for no other reason than “we can do it!” (the sequel, Resurgence, was really bad about this.

So to do a good job, I have to watch a lot more movies; as I don’t know which ones will give me insight (not all do), I watch more on top of that. As I can’t watch every single ET on Earth film, I have to set limits but it’s hard to know where to draw the line. In the end, I’ll have to go by instinct and hope I’m right. 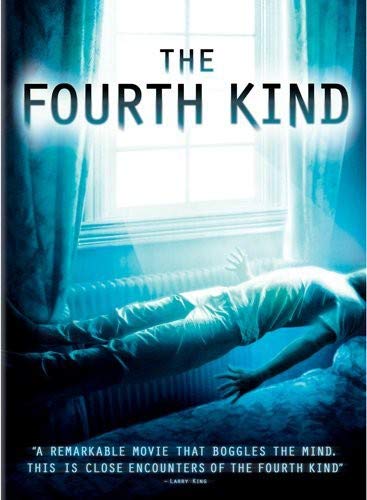 THE FOURTH KIND (2009) is a good example of why it’s tricky. It’s a mediocre movie that I only watched on impulse but it turns out to embody many elements I think are key to the alien abduction film.

We open with Mila Jovovich, who plays Nome Alaska psychologist Abigail Tyler, assuring us the story we’re about to see is true — only the names have been changed. And we’ll even see real footage of Dr. Tyler (interviewed by the filmmaker) and some of her patients. It’s a combination of based-on-truth and found footage films!

We learn Tyler is grieving the death of her husband several years earlier, at the hands of an intruder who might have been an alien. Sheriff August (Will Patton) thinks not, but can’t convince her. Then some of Tyler’s patients start reporting how something creepy but unexplained has happened to them after seeing an owl at the window. Turns out that as Twin Peaks said, the owls are not what they seem. Hypnosis reveals Nome is dealing with a close encounter of the fourth kind — abduction (astronomer Allen Hynek’s 1972 encounter scale did not go above three, in case you were wondering).

Where Dark Skies is UFO Abduction as Poltergeist, Fourth Kind knocks off The Exorcist. The aliens implant something inside victims that in the found footage is able to levitate them above their beds, or twist their necks around (unlike Blair, this snaps their necks lethally). The alien entity claims to be God, but there are indication its a Sumerian demon — and did you know the Sumerians drew carvings exactly like the Apollo space capsules? What about the fact (as Jovovich reminds us at the end) that Nome receives more FBI visits than any other town in Alaska? OMG, what does it all mean?

Well, don’t look for the film to answer. Like many other alien abduction films, we never learn what’s really going on. That’s part of the illusion of based-on-truth paranormal films — it’s real life, not something we can tie up and resolve neatly. August eventually forces Tyler to admit that her husband wasn’t killed by an intruder or an ET, he took his own life. She’s just blocked it out. In some movies, that might prove everything’s her imagination; here, it excuses August disbelieving her but should we?

If this makes the film sound interesting, it’s not. It’s a muddled, murky mess. But from the POV of someone writing a book on this topic, it helps me understand the genre a lot better. “When something boasts 11 million witnesses, that could win any court case in the world.”