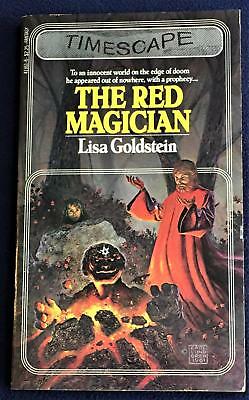 Despite the cool cover, THE RED MAGICIAN by Lisa Goldstein only has one scene with a golem, as the eponymous magus attempts to create one only to have a hostile Rabbi/mystic undo his work. That said, this was a good one to reread, told from the POV of a young Jewish girl watching the Red Magician warn her 1930s European village about bad things coming, only to find the local Rabbi, who has magic of his own, stubbornly oppose him. As usual for Goldstein (this was her first novel), the magic is wild, unchaotic and feels very magical; the golem’s creation feels mystical, rather than simply reciting a spell.

SWEEP: The Story of a Girl and Her Monster by Jonathan Auxier is set in 19th century England, where protagonist Nan has been enduring life as a chimney sweep working for the brutal Crudd ever since the disappearance of her mentor/father-figure (never named other than “the Sweep”). When she almost dies cleaning out a school chimney, the ball of strange soot the Sweep left with her comes to life as a golem and saves her. Now they have to stay off Crudd’s radar while Nan introduces her new friend Charley to the wonders of life. This is a good juvenile, though stock as a story of an artificial life form; as a golem it’s only marginal (it talks — golems can’t — and there’s no clue how the Sweep created Charlie).

In THE MONOLITH by Jimmy Palmiotti, Justin Gray and Phil Winslade, protagonist Alice is a drug addict trying to avoid falling into the clutches of Princeton, a ruthless pimp who wants her working for him. When she inherits her grandmother’s old home she hides there, but discovers Something walled up in the basement. It turns out that years earlier, grandma helped a local rabbi make a golem to fight the local mobsters only to seal it away when it became too aggressive a vigilante. Now, though, it may be the defender Alice needs … This is the first three issues of a DC series, though the TPB came out from Image (I presume that means it’s creator-owned) — as the remaining issues involved Batman, I doubt we’ll see them reprinted. No great loss: I saw this in single issues and wasn’t impressed. It’s readable, no more than that.

I’ll add one last extra that definitely belongs in my article, the third and final issue of Atlas’ Bronze Age The Scorpion, by Gabriel Levy and Jim Craig. As Tom Brevoort explains, the first two issues, by Howard Chaykin, had presented the Scorpion as an immortal 1930s pulp hero, whom Chaykin turned into Dominic Fortune at Marvel 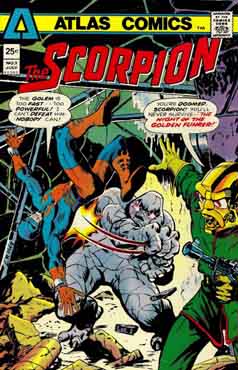 after Atlas tanked. In #3, the Scorpion is a modern-day costumed crimefighter (given the immortal angle I’m guessing he’s the same guy) who goes up against a Fourth Reich with the help of a golem (the rationale for creating the golem is both contrived and kind of interesting).