Wonder Woman: George Perez’ era ends with a War of the Gods! 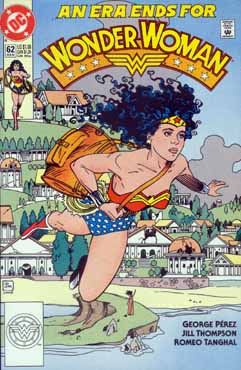 In 1991, the George Perez era of Wonder Woman came to an end with #62. Though really, everything that’s happened since has built on his foundation; even Greg Rucka’s recent reboot just gets us back to Perez after the mess of the New 52 reboot. It’s a disappointing stretch, building on the murky hints about Circe at the end of year four, and never attaining the excellence of the third year of Perez’ run.

After recapping much of the previous series in #49, we get #50, in which Hippolyta leads a party of Amazon ambassadors into “Patriarch’s World” to begin a goodwill tour. A running thread through the next seven or eight issues is that there have been mysterious deaths and thefts of ancient religious artifacts from museums in the cities the Amazons visit. Hmm, possible connection? Another complication: first Hermes seems to go nuts, then it turns out his Roman counterpart, Mercury, is impersonating him at times, then fighting to replace him. A third: everyone Diana knows is snapping at her, finding fault with her, worrying about the impact she’s had on their lives. It’s puzzling and upsetting for Di, especially when it’s all happening at once, and she’s had alarming, stressful nightmares about her friends.

Turns out there’s a reason. The post-Crisis Dr. Psycho has been mind-gaming everyone, subtly playing on their resentments

and Diana’s insecurities to torment and distract her. Unfortunately this version of Psycho is less interesting a reboot than the Roy Thomas take, which was close to Marston’s misogynist original. Perez’ seems to be (as my friend Ross once put it) a sadistic aesthete; at one point, after a woman’s seen through his disguise (Vanessa’s school guidance counselor), he torments her by feeding nightmares into her unborn child and forcing the mom to experience them. He gloats about what a brilliant masterpiece this will be. We never learn anything beyond that about his goals or origins. However this arc does climax with a great scene where Wonder Woman delivers the woman’s baby without either the baby or the mother dying (at that point

Things continue looking worse as the Amazons look more and more like killers. Wonder Woman herself comes under suspicion. Etta’s CO, General Yezdigerd, is up to something. Insp. Indelicato’s partner starts to see a pattern before he’s murdered. And then begins the War of the Gods. 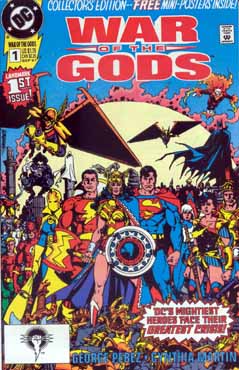 It turns out Circe (who was using Psycho to distract Diana) has been gathering the various stolen artifacts for a mega-ritual which summons most of the pantheons out of wherever they dwell when they stop being worshipped (it’s a little unclear). The Roman pantheon attacks Olympus to claim it from the Greeks. The Egyptian gods rise in Salem, where Dr. Fate hangs out. Thanagarian gods appear in Chicago, where Hawkman and Hawkwoman operate. Other deities manifest elsewhere. The Bani-Migdhall Amazons and the Cheetah are  involved as agents of Circe.

Her endgame? The destruction and rebirth of reality, with the new reality one where her patron, Hecate, will reign supreme. And in the process, Wonder Woman will be destroyed, as prophecy decrees either she dies or Circe does. And sure enough, right before the final issue of the crossover, Circe confronts Diana on the beach where Hippolyta formed her and reverts her back into clay. That might have been it but the demon Etrigan’s old foe Klarion, the Witchboy, mischievously sends Diana’s soul into Hell instead of the Greek afterlife. She returns for the big finish … which wasn’t so big.

I’ve complained that some stretches of Perez’ run get awfully talky, and the climax was very much so. There’s been so much going on, and much that isn’t clear so great honking swaths of War of the Gods #4 are devoted to explaining what exactly was going on, the secret history of Black Adam’s Egyptian pantheon-powers, why Solomon is one of the Shazam powers alongside Greek and Roman deities and more. It’s not much of a climax, and it’s not material we had to have (would anyone have thrown the book away and complained if we didn’t have Solomon explained?).

Perez’ final issue of WW follows. Appropriately the theme is moving on: Steve proposes to Etta, Nessie graduates, Hippolyta tells her daughter that she needs to go off and do her superhero thing and leave the Amazons to work out their own arrangements with the rest of the world and the Myndi Mayer Foundation, which in the DC Universe handles licensing for the Wonder Woman comic, gets a letter from George Perez saying it’s time for him to move on too.

Next up: The very different William Messner-Loebes run. We’ll see if it’s as much fun as I remember it.

#SFWApro. Top cover by Jill Thompson, everything else by Perez. All rights remain to current holders.

One response to “Wonder Woman: George Perez’ era ends with a War of the Gods!”