I KILL GIANTS by Joe Kelly and J.M. Ken Nakamura apparently has some cult status, but it didn’t work for me at all. Protagonist Barbara believes she’s defending her small town from giants, which is stressing her to the point nobody can stand to be around her — but is it true? Or is the giant-killing a metaphor for Something Else? Like Kingdom of the Wicked I figured the answer out almost at once, and wasn’t any more interested in the results than with the previous book.

BLACK HAMMER: Streets of Spiral by Jeff Lemire and various artists is an anthology that shows the limits of the Black Hammer mythos: the core story of the series is fine but as pastiches of various heroic templates, characters such as Abe Slam, Golden Gail and Barb Alien aren’t distinctive enough in a conventional adventure. Readable, but no more than that.

THEFT: A History of Music by Keith Aoki, James Boyle and Jennifer Jenkins is the product of Duke University’s Center for the Study of the Public Domain, looking at the history of copyright in music the way their earlier Bound by Law looked at fair use. This looks at musical notation, classical composers engaging in sampling (the assumption was that you could borrow but you had to do something new with it). and the impact of tech — does listening to a phonograph record or a player piano constitute a performance? Quite informative about our view of music, originality and copyright law, including such oddities as John Fogerty getting sued for ripping himself off (his former record label unsuccessfully sued on the grounds Old Man Down the Road was too close to Fogerty’s CCR work). If you’re interested you can download Theft for free, legally. 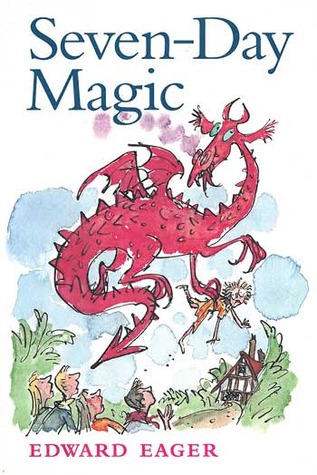 In Edward Eager’s final book, five kids experience SEVEN DAY MAGIC when they discover their newest acquisition from the local library is a magic book that both grants wishes and becomes whatever book its wielder most desires (Eager more or less acknowledges a debt to the similarly mutating magic ring in E. Nesbit’s Magic Castle). This leads them into the early days of Oz, the sequel to Half Magic (now I know why one scene I remembered so clearly wasn’t in the original book) and join their granny in her rip-roaring youth. The ending is unintentionally sad — the kids’ confidence they’ll have another magic adventure (and all previous kids got two) means we’d have had a sequel if Eager hadn’t died a couple of years later.

A LIBERTARIAN WALKS INTO A BEAR: The Utopian Plot to Liberate an American Town (And Some Bears)by Matthew Hongoltz-Hetling recounts how some rag-tag libertarians acted out one of the movement’s fantasies: move to a small state (or in this case a New Hampshire town) in large enough numbers to set policy, then strip away government services and let the free market take over. Countless liberal blog posts have predicted this would work out very badly, and it seems they were right: as town services dwindled away, no dynamic John Galts jumped up with a more efficient free-market solution. Roads deteriorated. Bears, already a problem in New Hampshire, swarmed in. Things got messy. Much as I take a certain schadenfreude in watching libertarian fantasies crash, the author does a good job not simply snarking at them. The cast of residents, libertarian and otherwise, a quirky, individualistic lot and Hongoltz-Hetling conveys a lot of affection for them and sympathy for their problems. He’s also clear about the state’s role — when similar bear problems hit a larger, more influential city, there was a lot more support.

SHADOW — GO MADE is, like The Shadow Strikes, a 1960s Shadow spy thriller by Dennis Lynds, but a stronger one. A series of crimes and other puzzling activities (Green Berets surrendering to the North Vietnamese for no reason) draws the Shadow’s attention. It turns out the SPECTRE-style crime ring CYPHER is using the crime wave as the equivalent of a PowerPoint presentation showcasing it’s latest service, access to mind-control tech which they’ll sell to the highest bidder (they considered leasing, but decided the contracts would become too complicated). Not up to the best of Walter Gibson, but entertaining.

#SFWApro. Cover by N.M. Bodecker, all rights to image remain with current holder.