Is Hell in Maine or Russia? Doc Savage in Up From Earth’s Center and In Hell, Madonna

And so we come to the end of my long Doc Savage reread (and occasionally first-time read). For the final installment (unless I do a Ten Best list or something at some point) we have the last story in Doc Savage Magazine, UP FROM EARTH’S CENTER and the unpublished IN HELL, MADONNA, which came out thirty years after Street & Smith rejected it. 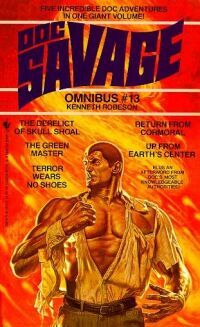 The omnibus volume that includes UP FROM EARTH’S CENTER also includes an essay by Will Murray about the changes in the series. It’s a useful reminder that while I tend to credit shifts in style to Dent’s creative decisions, they often weren’t. It was an editor who pushed for a more realistic tone during WW II and editor Daisy Bacon who pushed for going back to the 1930s style of adventure. She and Dent argued a lot about plots which is what led to this strange final tale. Dent submitted a list of plot idea, hoping Bacon would like one of them. She liked the idea of Doc Savage encountering the literal forces of Hell, but overruled Dent on making it a hoax a la The Sea Angel and The Squeaking Goblin. Bacon thought that was a cheat so we ended up with the series’ only supernatural adventure.

We open with a yacht picking up Gilmore Sullivan, a raving loonie, from an isolated island off the coast of Maine. They soon discover Gilmore is stark raving bonkers, claiming he’s escaped from hell, which he stumbled across while exploring the local caves. Dr. Linningen, one of the boaters, learns Doc Savage is in the area and goes to consult with him. Doc’s intrigued and along with Ham and Monk begins to investigate. Things get weirder when a Mr. Wail shows up, claiming to be a devil himself, though in no hurry to go back down below.

Wouldn’t you know, though, that’s how it turns out? Another devil shows up to recapture Gilmore. Doc, Monk and Ham force Wail to lead them back underground, through the crack in the caves that leads to Hell. It is a nightmarish world where trees wield their branches like tentacles and Doc confronts formless boulders sprouting multiple arms. At times the horrors are so Lovecraftian I suggested exactly that to an early Wold Newton fanzine; it’s a shame Dent didn’t write more in that vein. The creatures are unkillable but they’re terrified of fire — reminds them of diabolic punishments — which helps Doc get everyone to safety, after which he blows up the entrance, cutting Hell off. Wail is this side of the barrier, but when police bust him for some of his acts, he disappears from the cell.

The tale starts off slow and talky, but once it gets going it’s a wild ride and a great, if unconventional, finish for the series.

The series’ return with IN HELL, MADONNA, published as The Red Spider, was less satisfying. According to Will Murray, Bacon wasn’t keen on Cold War 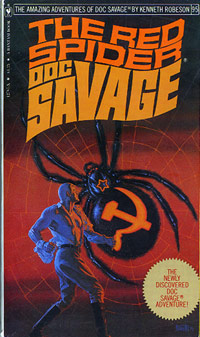 stories; I’ve also read that readers disliked the Cold War thriller Terror Wears No Shoes. Both could be true. In any case, even though In Hell, Madonna had been accepted by Bacon’s predecessor, Murray says she yanked it from the issue it was supposed to appear in; as the magazine had cut back publication frequency Dent didn’t notice. Bobb Cotter, however, says The Green Master replaced it. Only one of these can be true but I don’t know which. Either way, it’s the only story Dent wrote that didn’t make it into print.

Except it did. Researching Lester Dent’s ghost writers, Will Murray stumbled across a reference to the story and eventually tracked down the one surviving manuscript, a carbon copy Dent had made. He worked out a deal on rights that led to Bantam finally publishing it in the late 1970s under the title Red Spider. The new title refers to Frunzoff, a trusted agent of Stalin’s who sits at the center of everything the USSR is doing, monitoring every thread like a — well, you know.

The opening has a U.S. anti-radar rocket (with Long Tom and Rennie working on it) shoot into Russian air space by “accident.” Actually it’s to knock out their radar long enough for the military to fly Doc Savage across the border. He meets up with Monk and Ham, who have cover identities, and have established both the existence and the whereabouts of the mysterious Frunzoff. He’s the man who can tell Doc what he’s in the Sovietn Union to find out: does Stalin have the A-bomb? Are the Russians working on building a bomb? How close are they?

Getting the information turns out to be fairly easy, but now they have to get it to the West. Complicating things are siblings Seryi and Mahli, two Russians who offer assistance, not out of any anti-Communist principles but because if Frunzoff goes down over this, there will be openings in the upper echelons. Seryi and Mahli are outside the corridors of power; they hope this adventure will change that. To that end, they’re willing to help Doc, Monk and Ham escape to the West, but they’re in the heart of Moscow and it’s not going to be easy….

Murray, who loves the later, more realistic era of Doc adventures, considers this one of Dent’s finest works. I can’t say I feel the same. The mission would have had a ripped-from-the-headlines quality at the time, but even in the 1970s when I first read it the Cold War was looking decidedly old-fashioned. It’s certainly a competent, taut spy novel, but it’s more Doc as a B-list Bond than Doc as Doc.

Murray also thought Seryi worth bringing back for The Frightened Fish as a serious love interest. That I just don’t get. She’s not a bad character but not one of Dent’s more memorable women, and there’s no chemistry between her and Doc. I can think of several women from the WW II novels that Doc got much more flirtatious with.

Either way, my reread reaches the end. It’s been a lot of fun, but I’m not sorry to wrap up.