I’ve never been a fan of Alfred Hitchcock’s FOREIGN CORRESPONDENT (1940) but I find myself appreciating it more as part of my ongoing Hitchcock viewing: making the first third of the film a comedy makes more sense when compared to The Thirty-Nine Steps or The Lady Vanishes. It still doesn’t work as well as they do though. 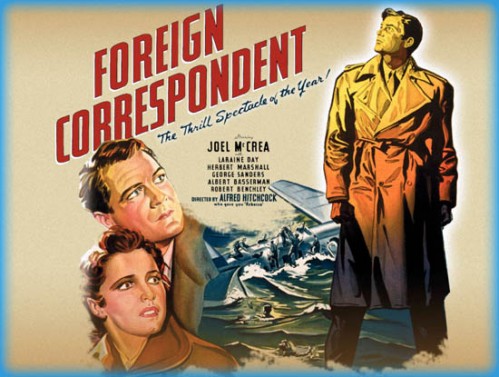 Joel McCrea plays a crime reporter whose boss ships him off to Europe on the theory a hardnosed investigator with a nose for news will get better scoops than foreign correspondents who just send in the latest government press releases. In Europe McCrea falls hard for Laraine Day, daughter of peace activist Herbert Marshall — this is where the comedy comes in — and meets with a prominent Dutch politician who’s a key player in whether Europe goes to war or not (I don’t really see how the guy could have stopped it, but I’ll accept the premise). When the politician is apparently murdered, McCrea realizes the man was an imposter; Nazi agents have kidnapped the real pol to get the truth about his secret treaty negotiations. Can McCrea rescue him in time? “Your childish mind is as out of place in Europe as you are in my bedroom.”

sex, lies and videotape (1989) blew me away when I saw it in theaters, between it’s frank, unconventional discussions of sexual dysfunction and the presence of Andie McDowell and Laura San Giacamo as sisters in Baton Rouge. They’re in a triangle with McDowell’s husband Peter Gallagher but when his college friend, voyeuristic James Spader shows up, the triangle becomes unstable.

Rewatching now I think that, as Roger Ebert put it, the results are more clever than enlightening; I don’t find it convincing that everyone has as much self-awareness as they do, let alone that they can discuss themselves articulately and without any impulse to lie or shade the truth. This problem has turned me off several Woody Allen films over the year but here the movie holds my interest, primarily because of the strong cast and their relationships. It is more clever than enlightening but it is very clever, and that was good enough. “What would you know about a normal frame of mind?”

I watched AMULET (2020) as part of a streaming program by the local Carolina Theatre but it was definitely not worth the price (but hey, I can say that about lots of films I’ve seen at the nearest multiplex). Nun Imelda Staunton sends a burned-out foreign veteran to move in with a woman and her deranged mother. Everything’s dark and moody with occasional shocks (and to their credit they are indeed shocking) before we learn Mom is a demon the woman is reluctantly forced to watch over. And from there, we accelerate to an ending that made absolutely no sense. I do not recommend it. “Forward is not the only way, Tomaz — there are other roads.”

One response to “Reporters, voyeurs and horror: this week’s viewing”