Lot of stuff done, though it wasn’t very creative

But I did bake some bread that came out great. I guess that’ll be my artistic accomplishment for the week. 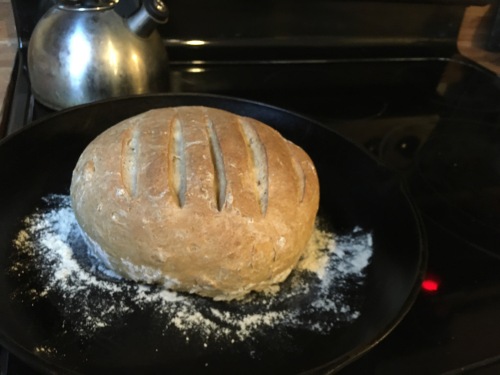 It’s a beer bread from 100 Great Breads, in case you were wondering. Not as strongly flavored as some beer-based breads I’ve made, but quite tasty.

So last weekend, I was housebound with the pups while TYG was traveling. Result? Sunday work didn’t come off. In the morning we had a three mile walk; by the time I got back, had some hot chocolate (it was a cold morning) and got read to work, I only had 90 minutes before lunch walk (the shrinking daylight has pushed the start time a lot later than a couple of months back). And that was another three mile walk, after which I felt too stiff and wiped to do much. So poof!

So rather than try to squeeze in my usual mix of fiction Sexist Myths and Leaf articles, I decided I’d switch to all Leaf for a week and then going all (or mostly) in on my personal stuff the rest of the month. Result? Sixteen Leaf articles done. I’d actually hoped to do more, but with no break from the work, my mind found it harder and harder to focus.

I might do some next week anyway, but a lot less than usual. Or maybe none — we’re getting close to the point where the remaining articles are topics I can’t do.

Thursday I devoted my hours to cleaning. We’re having the writers’ group Christmas Party Saturday so I wanted to get as much cleaning out the way as possible. That included bringing in a couple of contractors to check out a ceiling problem (minor, happily) and the carpet cleaning company (dogs deposit a lot of mess on carpeting. Who knew?). Plus Google Fiber is available in our neighborhood, and we’ve switched, so I had to deal with the installer. He was good, but it took more time than I expected.

So not much creative work done. But a lot will get done in the next couple of weeks. Woot!

#SFWApro. Photo is mine.

Filed under Nonfiction, The Dog Ate My Homework, Time management and goals, Writing