JFK AND THE MASCULINE MYSTIQUE: Sex and Power on the New Frontier by Steven Watts, hooked me with its introductory chapter discussing the 1950s’ fears that corporate conformism was emasculating men (Watts sees this as a twisted image of the housewife’s frustrated life in The Feminine Mystique) while wives dominated husbands and working women were taking over business! JFK seemed the perfect antidote: a handsome war hero, charismatic politician, the embodiment of masculine vigor and a world-class ladies man — who cares what his policies were? And JFK’s own desire for manliness shaped his view of Vietnam, the CIA (and his fondness for James Bond) and the Cold War.

Unfortunately the book from there turns into multiple profiles of the era’s various macho men and womanizers such as Hugh Hefner, Frank Sinatra, Norman Mailer and Ian Fleming himself, included based on whether Watts can claim some sort of tie-in with JFK (Sinatra and the Rat Pack yes, but Kirk Douglas and Tony curtis are a stretch). While he shows how each man represented an alternative to suburban/corporate drone life, the broader question of masculinity in crisis takes second place to the biographies — and it doesn’t help that Watts’ idea of masculinity in revolt seems to be sleeping around a lot. This also needs more context: America had been fretting about masculinity before the 1950s just as it frets about it now (Women Taking Over and the End of Men are still rallying cries for sexists). Nor do I buy his conclusion that this style of predatory womanizing was so much worse than old-school patriarchy, it helped prompt the woman’s movement. Despite some good sections, this was overall a thumbs-down for me. 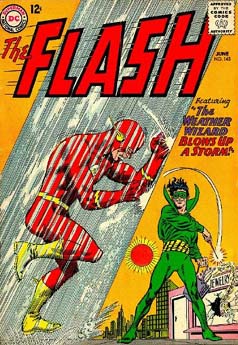 THE SILVER AGE FLASH OMNIBUS: Vol. 2 by (mostly) John Broome and Carmine Infantino collects the run of Flash (pun intentional) from #133 to #163. The Scarlet Speedster battles his Rogue’s Gallery, tackles alien invaders, copes with Iris’ constant carping (what would have been stock relationship stuff in fiction then looks a lot more shrewish now), teams up with Kid Flash, Jay Garric and the Elongated Man and loses his powers a couple of times. While I have most of this era in comics, it’s good to fill in the few gaps, and Infantino’s art is absolutely breathtaking in this format. Like most Silver Age comics, not for everyone, but definitely for me.

While it’s targeted at a much younger age range than me, I really enjoy DC SUPER-HERO GIRLS, the online cartoon that imagines DC’s heroes (and a few antiheroes) as teenagers attending high school under principal Amanda Waller and Vice-Principal Gorilla Grodd. In Finals Crisis by Shea Fontana and Yancey Labat, someone’s kidnapping the school’s top female students, but why? And can they pool their abilities to break free? This was light-hearted fun, and I do enjoy some of the results of mixing characters together, like having Katana and Beast Boy as sparring partners (he’s fast, agile and unpredictable so Katana finds him a great adversary).

THE LIBRARY OF THE LOST AND FOUND by Phaedra Patrick has a self-sacrificing librarian discovers a book holding a collection of her childhood writings, and autographed by her supposedly dead grandmother; investigating, the librarian gets to reboot her life and unearth a boatload of family secrets. I have real trouble with the protagonist: she’s endlessly put upon (I can understand caring for her sick parents, but washing and ironing her coworkers’ clothes?) and miserable throughout (if sacrifice sparked joy, that would be different — this is like my problems with Heroine Complex only worse) and at the end she’s way too forgiving of her family (even her emotionally abusive father was doing the best he could!) for my taste.

THE CRYSTAL GRYPHON is Andre Norton’s prequel to Year of the Unicorn, set in the Dales during the early years of the war against Alizon (the story seems to show Alizon was so successful because they used Kolder technology). Kerovan is a nobleman cursed from birth with cloven hooves and golden eyes (a minor plot weakness is that we’re alternately told his face is unearthly and that with his hooves covered he looks quite normal), betrothed in childhood in a political match to Joisan. Their meeting and wedding get postponed by the war, but inevitably their respective struggles draw them into each other’s orbit. That, in turn, pits them against a scheme by Kerovan’s mother (in a nice touch we learn she shunned him not because she thinks he’s a monster but because he’s not the demon-possessed child she wanted to create) to raise Dark Powers and take control of the Dales herself. While Kerovan/Joisan has a lot in common with Gillan/Herrel in Unicorn, Joisan’s a distinctive character, strong-willed and good-hearted but with no qualms about political marriage being one of her duties. Unfortunately, the ending gets very deus ex as the magic the good guys have tapped pretty much does the work for them.

THE EVOLUTION OF USEFUL THINGS: How Everyday Artifacts — From Forks and Pins to Paper Clips and Zippers — Came To Be As They Are by Henry Petroski argues that in designing every day items it’s not “form follows function but “form follows failure” — thus utensil design in each generation is a response to what the older forks and knives can’t do (plus the sheer range of potential designs means there’s no one form for each function). Petroski applies this analysis to forks, paperclips, hammers (how many specialty hammers do we need?) and zippers, noting as he did in Small Things Considered that no design is ever perfected as we don’t know what might be done with them in the future. Good, and many of these details would be useful for fiction (broad-bladed knives in some eras were tools for putting food in our mouths; before the 19th century invention of the paperclip, packets of paper were often pinned together).

#SFWApro. Cover by Infantino, all rights to image remain with current holder.