BATMAN: THE BRAVE AND THE BOLD: Emerald Knight by various writers and artists shows this is still the funnest 21st century Batman, as far as I’m concerned. This is a Batman who actually enjoys squaring off against the Dinosaur Head Gang, helping Huntress against the stalking super-villain Mr. Camera (the twist on why Huntress came to him for help was really neat) or discovering Egghead has allied with the cosmic horror Ygg FuSothoth (a takeoff on Wonder Woman’s Egg Fu). Certainly this was more fun for me than anything in continuity since the New 52.

The first volume of STRONG FEMALE PROTAGONIST by Brennan Lee Mulligan and Mollie Ostertag collects the webcomic about Alison Green, the former superhero Mega-Girl. Alison quit when her anti-hero archfoe Menace made her see that all their clashes of titans weren’t actually changing the world — and the people who’s powers could have, have been eliminated over the years. But she does want to make the world better so how does she do it? I like the concept and the character interactions and Alison’s decent heart, but sometimes she’s so idealistic she’s an idiot. I think that’s intentional — like a lot of idealistic college students she doesn’t always see the forest for the trees — so it didn’t bother me too much. The art’s kind of “meh” though.

ATLAS MAJOR is a reproduction, with notes, of Joan Blau’s 1600s atlas of the world (his plans to further map the heavens and the oceans never came to pass). I flipped through this mostly in relation to something I’m working on, but this was unquestionably an impressive achievement. It also shows me I didn’t know the world of old atlases as well as I thought. My mental image is of beautifully illustrated global maps like the one above, but a lot of Blau’s atlas shows far more detail about major cities or regions than I expect. For me it’s more something to page through and go “oooh” than read closely, but there’s a lot of “oooh” here.

SMALL THINGS CONSIDERED: Why There Is No Perfect Design by Henry Petroski looks at efforts to design better chairs, better toothbrushes, better potato peelers and better car cup-holders to show how any design is guaranteed imperfect due to cost constraints, consumer interest or lack of interest and the pros and cons (better toothbrush handles are too large to fit into toothbrush holders). Even in the best circumstances, Petroski points out, there’s not going to be a perfect design because we always have to admit that there might be something better that hasn’t been discovered yet. As usual with Petroski, extremely interesting. However his efforts to expand his theme and discuss how everything is design (how we plan our weekend, how we decide what we’re going to eat) were forced.

Two decades before John Ostrander introduced his super-villain version of the Suicide Squad, Robert Kanigher tried repeatedly to make the concept work. SUICIDE SQUAD: The Silver Age collects the stories of Task Force X (seen above) an elite team known as the Suicide Squad because of the deadly nature of their missions. The stories are the weird kind of monsters and SF menaces Kanigher used in his Wonder Woman and Metal Men runs, but like the Blackhawks, it suffers from having too many colorless protagonists. 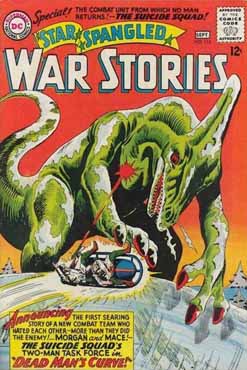 When this series failed to sell, Kanigher switched to “The War That Time Forgot,” which ran for eight years in Star Spangled War Stories. The series premise was WW II soldiers battling dinosaurs, sometimes thawing out of suspended animation, sometimes living on isolated islands, always absurdly powerful (as one fan site noted, real dinosaurs can’t bite through tanks, but it’s certainly cooler when they can). It included one shot characters but also several recurring protagonists. One was a PT boat skipper in a “Suicide Squadron” so nicknamed for its dangerous missions.

Then came a new version of the Suicide Squad, once again an elite team trained for impossible two-man missions. Kanigher tried to jazz up the drama (as John Seavey says, he didn’t seem to think dinosaurs were enough) by having the mission teams hate each other. Morgan, for example, hates his partner Mace for getting Morgan’s brother killed through (as Morgan sees it) cowardice. Every issue they’re in we get Morgan explaining how Mace’s every heroic action just proves he’s a coward … somehow. It gets old. It doesn’t help that Mace just grits his teeth and takes it; if he hated Morgan back, it would be better.

While I’m not a huge fan of John Ostrander’s Suicide Squad, it’s definitely the best version of the concept to date.