Not your typical Doc Savage: The Terrible Stork, King Joe Cay and The Wee Ones

While I’m used to Lester Dent writing Doc as an average guy in his 1940s adventures, and even making him fallible, THE TERRIBLE STORK just takes it too far. 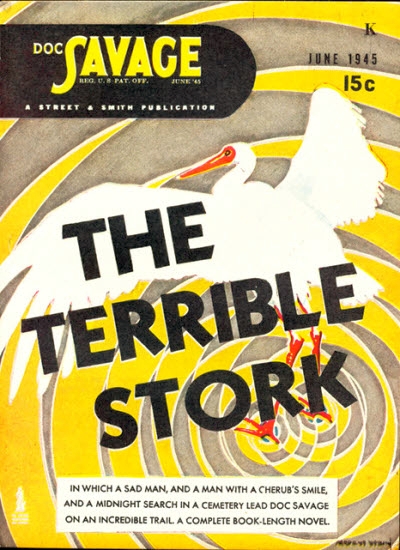 It starts well: Doc, Monk and Ham slip into an auction room to get some relief from the heat and witness an insane bidding war over a cheap metal figure of a stork. One of the losers then resorts to gun play. Doc winds up in possession of the stork which seems to be completely ordinary, except for the legion of people trying to get hold of it. It turns out there’s a guy who’s been hiding gold and jewels belonging to members of the German government, so their wealth will be safe if Germany loses. Now the guy is dead, but the stork holds the key to the location of the goodies.

It’s a decent set-up but the good guys have been hit with the idiot stick. Doc opens a container of tear gas to confirm its contents, then suddenly realizes it might have been poison gas! Oops. Later he spots a sign someone has hidden a clue, but just ignores it. When assigns Ham to research one of the players and Ham seems to find the assignment baffling. Monk sounds like a dumb mook when he talks.

KING JOE CAY follows The Freckled Shark and The Lost Giant in having Doc undercover as a rogue and troublemaker for much of the book. Unlike them, Doc’s playing a lone hand, with his five friends all absent (a first for the series).

We open with tough guy “Clark” on a train with some crooks, trying to finagle a McGuffin from an attractive woman named Trudy. Doc succeeds in stealing her purse but can’t find the goods, so he, then strikes up a flirtation with Trudy. She, however, is not fooled (though she doesn’t know who he really is) and gets him busted by the cops when they get off in Florida. He chases her while crooks Tom Ittle and Brigham Pope chase them both. Doc at first thinks of Pope as nothing but a cheesy actor up to some dirty work, then notices how he terrifies everyone involved. He realizes it’s not that Pope’s an actor by profession, it’s that he’s acting, playing a man much less dangerous than he really is.

Doc got involved in all this at the request of Charlotte D’Alaza, a grasping millionairess he met years ago (Chronology of Bronze speculates she could have been involved with Clark Savage Sr.). However she refuses to tell him the McGuffin everyone’s after. For good reason. It turns out the secret is several documents concerning the disposal of Jewish property taken by the Nazis; Fleish, the man who took control of the assets, sold it off to Charlotte for pennies on the dollar. If her involvement in that sort of scheme is exposed, Congress will destroy her plan to build an airline monopoly.

This is another Ordinary Doc Savage story, but more entertaining, and Charlotte’s a great supporting character.

THE WEE ONES does a good job concealing its true nature: it’s a straight mystery plot but looks like a pulp SF story. The hook is a mysterious dwarf, two feet high, running across the small town of Hammond City, terrifying the populace with savage attacks. For Doc Savage, that’s Tuesday: he’s faced similar creatures before in The Goblins and The Gold Ogre, though in this case he’s skeptical, quipping that “nothing is impossible, but many things are ridiculous.” Hammond’s residents are a lot more worried as accounts of the dwarf — identical to Lys, the missing lab assistant of John Fain, who runs an electrical company — attacking people with a knife spread through town. Men working at Fain’s company decide to stay home to protect their wives, which could interfere with the company’s war work; is this an Axis plot? Curiously the previous two books read as if the war is over (they were written at the end of 1944, but came out in the summer of 1945) but this one (from January of ’45) shows it’s ongoing.

Nope. It turns out Mrs. Fain married her hubby without divorcing her first husband (they don’t specify, but it appears to be part of a scam to get Fain’s money and assets). The truth is about to come out so they’ve been doping Fain, who already had a nervous breakdown a while back, to make him unstable. He thinks the dwarf was born from some lab experiment of his, so news that fear is shutting down the town will push him over the edge, freeing his wife to take over his affairs. To fake the dwarf attacks, they simply spread stories around town to stir things up.

If not A-list Doc Savage, it’s still a solid read. Contrary to the cover, the dog plays almost no role in the story. Trivia point: this reveals that despite his competence at everything else, Doc is a terrible cook.

#SFWApro. Covers by Modest Stein, all rights to covers remain with current holder.