Here’s one slice of cute. They don’t usually sit together, but Plushie kind of slid into that position after I got up and removed my lap from around him.

The other slice, while I didn’t get a photo, was that this morning when I opened the door to clean cat dishes off the deck, Wisp plopped herself down on my feet and just lay there, inviting me to scratch her belly. I’ve always been nervous about getting that close to her claws, but she seemed to want it, so I did … and she liked it! We still have to find a way to catch her, though (I suspect doing so will set her back to Suspicious, but it needs to be done).

Now, as to work, a pretty good week. Despite having the Oberlin alumni picnic last weekend, I managed to get in my three hours of Sunday writing. So it looks like I can stick with this approach for a while and quit earlier in the day on weekdays.

I have now rewritten Undead Sexist Cliches through Chapter Eight, on abortion and birth control. Now I just have to work on Chapter Nine about the concept of the “sexual marketplace,” and I can start with the next draft, which will add footnotes as well. I also forced myself to read some of antifeminist Mona Charen’s Sex Matters to get some examples of bad sexist language (among other things, Charen blames feminism for making women cry “date rape” if they have bad sex. No, it doesn’t make any more sense in the original).

Working on the book took more time than I expected, so I didn’t get as much fiction writing done as I’d hoped. But I worked on Death Is Like a Box of Chocolates and it’s starting to have an ending. Not a great ending yet, but closer than it was. I keep feeling the urge to set it in the early 1980s but I’m not sure why. I suppose I could just use 1983 as a backdrop but I can’t help thinking there’s something I’m missing. Perhaps it’ll come to me.

Tuesday, I went to the writers’ group and afterwards we went out to Motorco in downtown Durham. It’s a much better place to eat than our usual after-group hangouts and as we’re eating outside, it’s much easier to hear conversations without the background babble building up as it does in enclosed rooms. But due to limited parking in the area and lack of familiarity, I opted for Lyft. This proved more expensive than I expected, and when I called for a pickup at 10:15 PM it took longer to get a ride than I’d anticipated. Perhaps I should switch to my own car next time, but then again I really hate navigating unfamiliar places in the dark.

Oh, and I began thinking seriously about a cover idea for Questionable Minds. I got several suggestions on FB from my friends; I’m thinking a Victorian street with maybe some kind of psychedelic coloring (reflecting the paranormal elements) but I’m not quite sure what people to put on it. Jack the Ripper lurking? Or maybe have an arm wielding a scalpel and Simon’s arm grappling with it, imposed on the street scene? I’ll give it some thought, but I’m on the way there. And I found some street scenes that might do the trick, like this public domain 1867 photo by Thomas Annan below (courtesy of wikimedia commons) 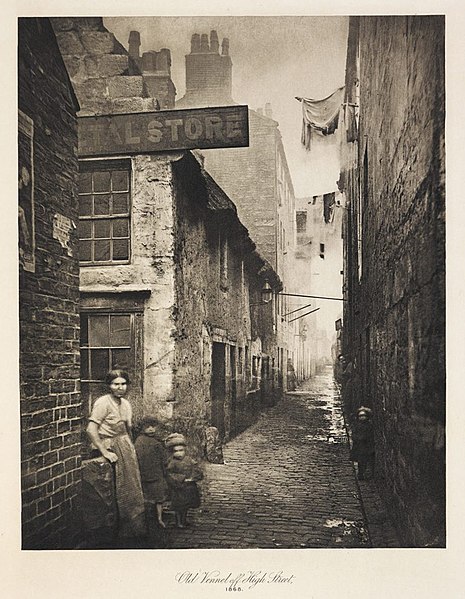 #SFWApro. Dog photo is mine.