THE MIRROR OF HELEN by Richard Purtill was the third in a Grecian fantasy trilogy he wrote back in the 1970s, amounting to three novelettes: her abduction in youth by Theseus, her life in Troy as the war moves to its end and the obscure legend that the Helen in Troy was just a doppelganger created by Egyptian mysticism, and the real Helen was safe in the land of the Nile for all ten years.

Purtill writes the period well and he manages to work within the sexism of the age without making it insufferable the way The Sword is Forged did. I really like his take on a lot of the characters, from cunning, tricky Odysseus to Helen, who fears her own beauty is a curse (as every man who sees her loves her, what mane will ever love her for who she is inside?). However after reading Helen of Troy last week I found myself more conscious than on first reading how very passive Purtill’s Helen is. She never wanted to go with Paris, but was forced into it by Aphrodite (the earlier book points out that by Greek standards, being influenced by the Olympians didn’t let her off the hook); more than that, she seems completely resigned to everything, not pining for Menelaus, nor resisting her captivity nor grieving for Paris’ death. The book was worth rereading but I rate it less highly than I did at first.

THE BOG PEOPLE: Iron Age Man Preserved by PV Glob (a Scandinavian archeologist who wrote the book to answer the letters he was always receiving) looks at the Tollund Man (below) and other cases of corpses found perfectly preserved in peat bogs, even after centures: you can see the noose around his neck, and it’s possible to study hairstyles and even fingerprint some of the corpses. Glob looks at some of the best-known cases, how they were discovered and what they looked like (it’s well photographed) and speculates as to them being ritual sacrifices (I’ve no idea if that theory has held up — this book was written in the 1960s). Dry, but the topic snd the images are just so cool. 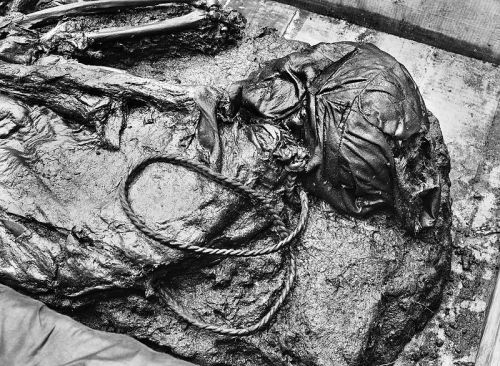 There’s a long tradition of SF authors expanding early short stories or novellas into full novels, which is what Leigh Brackett did with THE SECRET OF SINHARAT (a revised and reworked version of Queen of the Martian Catacombs) and THE PEOPLE OF THE TALISMAN, a reworking of  Black Amazon of Mars. In Sinharat, Brackett’s feral-child turned mercenary Eric John Stark is about to sign on with a warlord plotting to lead a barbarian army against Mars’ city states. A old friend convinces him to become a mole for Earth intelligence and stop the war before it starts. Unfortunately an old rival, a beautiful girl and a secret body-jumping immortal make his mission far more dangerous than expected. It’s a good yarn, but not great.

Talisman, however, is absolutely awesome. It starts off like Black Amazon: a dying thief asks Start to take a stolen holy relic back to the city of Kushat. Along the way, Stark falls afoul of the warlord Ciaran, who’s targeting that city to begin his (actually her, as we find out later) reign of conquest. Taking refugees and the talisman beyond the pass called the Gates of Death, Stark goes looking for allies. Instead he finds a creepy ruined city occupied by immortals who seem to have taken the Joker as a role model: they’re giggling insane and spend their time murdering each other (the victims find it as fun as the killers). And now look, all these humans have come here to play … It’s vastly creepier than the lost city in the original story, and I think this is one of Brackett’s best.