Ever since catching She Loves Me I’ve been planning to get around to THE SHOP AROUND THE CORNER (1941), which adapts the same Hungarian rom-com. In Budaest, salesclerk Jimmy Stewart and new co-worker Margaret Sullavan find each other the Most Obnoxious, Most Irritating, Most Annoying — well, you know where this is going, right? Complicating things are that they’re already in love as penpals but have never met in the flesh. Frank Morgan plays the worried store owner and Joseph Schildkraut is a smug clerk. Directed by Ernst Lubitsch with his usual charming touch; even though it’s not as lively as the musical, it’s completely winning. “Then we got onto the topic of love — at a cultural level, of course.”

Six years earlier, Sullavan appeared in THE GOOD FAIRY (1935) as a naive, convent-raised orphan who wants to do good in the world. Her efforts lead to her almost becoming Frank Morgan’s mistress and posing as impoverished lawyer Herbert Marshall’s wife, much to the disapproval of kindly mentor Reginald Owen. Pure fluff, but immensely likable.  “I shall buy a pencil sharpener with holes for different sized pencils, at last!” 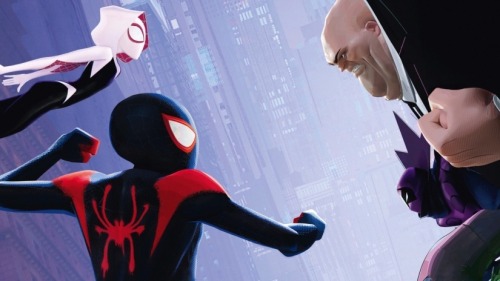 SPIDER-MAN: Into the Spider-Verse (2018) has Miles Morales (who became Spider-Man in one of Marvel Comics’ parallel worlds) stepping up to the plate after Peter Parker dies trying to stop the Kingpin (Liev Schrieber) from reaching into the multiverse to find his dead wife and son (a la Quest for Love) — the problem being Doc Ock’s dimensional probe could easily blow up Brooklyn in the process. Fortunately for Miles the probe has also brought an older, divorced Peter to his Earth along with Spider-Gwen, anime heroine Peni Parker, Spider-Man Noir (Nicholas Cage) and Peter Porker, the Spectacular Spider-Ham! This started a bit slow for me (teen awkwardness isn’t the hook it would have been for me forty years ago) but it soon won me over. “Where is that wind coming from? We’re in a basement.”

NORA’S WILL (2010) has a man discovers his long-suicidal ex-wife has finally done the deed, which leaves him feuding with the local rabbi (“What does suicide have to do with criminals?”) pouting over the realization she had another lover and coping with the usual family angst of funeral movies. Didn’t really work for me, though I can see why it got some good reviews. “Don’t make anything from the food in that fridge.”

#SFWapro. All rights to image remain with current holder.