A mostly uninspiring week of reading

As witness I gave up on the first three books without finishing.

RED CLOCKS by Leni Zumas is set in a near future where the federal government has banned abortion, and the effect this has on several women in Oregon. While this was billed as dystopian SF, being unable to get an abortion is such a reality for women in parts of the country, I don’t know why Zumas bothered with the near-future angle. A bigger problem is that while her writing style is good, she places much more emphasis on style than substance: there’s a real sense of distance about the characters (as I said about Escape to Loki, her characters don’t feel things as much as think about what they’re feeling). At least that held true for the part I finished.

In THE DISCOVERY OF MIDDLE EARTH: Mapping the Lost World of the Celts Graham Robb joins a long tradition of people who think they’ve discovered the hidden truth behind written history. In Robb’s case, that the Celts were vastly more sophisticated a culture than Roman accounts credit; Caesar says Celts shared news by shouting from village to village but “obviously” that simplifies a complex, sophisticated network of messengers stationed across Celtic territory to transmit information not by shouting words but by a complex code allowing them to share information with telegraphic swiftness. This might have intrigued me when I was a teen (and the idea of the network would certainly be a good touch for some fantasy story), but now? Not at all convincing.

COME AGAIN by Nate Powell is a well-drawn but aimless work involving a hippie commune, the secrets its residents keep from each other and some sort of Thing in the nearby cave. But I didn’t find it compelling enough to keep reading. 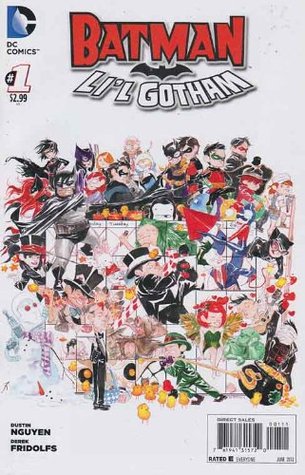 Now, the good stuff: BATMAN: Li’l Gotham by Derek Fridolfs and Dustin Nguyen (cover by Nguyen) is a fun all-ages book that started as a webcomic, shifted to single issues, then to TPB. See Batman treat his Rogue’s Gallery to Halloween dinner! Watch Poison Ivy, Harley and Catwoman spend Christmas together! Cringe at the embarrassment when Barbara Gordon and Talia al Ghul take their fathers to the same restaurant for Father’s Day (ssurprisingly I never caught any Long Halloween jokes despite the holiday theme). Charming.

LOBSTER JOHNSON: A Chain Forged in Life by Mike Mignola and various collaborators has the Lobster dealing with a kidnapped sidewalk Santa, a resurrected gangster, the Crimson Men and a cannibal cult formed among the hobos in a local shantytown. Pretty good, and like the volume below, already added to the Hellboy Chronology.

HELLBOY AND THE BPRD: 1955 (again by Mignola and others) has one big, and obviously mythos-building story, Occult Intelligence, in which Hellboy and pretty much every established BPRD agent investigates strange goings on in the Pacific; Professor Bruttenholm meanwhile discovers that Britain is actively engaged in occult espionage. The other two stories are good, but not as significant (or so I assume). I am curious how they’ll handle 1956 given we already know Hellboy spent most of it in a drunken fugue in Mexico.