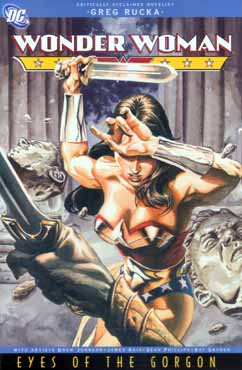 WONDER WOMAN: Eyes of the Gorgon is part of Greg Rucka’s run (with various artists; book cover by JG Jones, all rights with current holder) which as I mentioned recently, reads much better than I expected. The first Rucka issue I read turned me off by referencing the god’s “portfolios” of control (it’s a common term in D&D and that did not give me a good feeling). As it turns out, his writing is as good as I’d heard, as Diana tries to avoid a Themiscrya/USA war while a scheming corporate executive resurrects Medusa to take Wonder Woman down. Rucka certainly does a better job mixing Olympian scheming with super-heroics than the current series.
I haven’t been impressed by Rick Remender’s comics work to day and UNCANNY AVENGERS: The Red Shadow (with art by John Cassaday) didn’t change that. As part of Marvel’s soft reboot, Captain America creates a combined mutant/super-hero team of Avengers to give mutants a more positive profile, only to encounter a Red Skull who’s had Professor X’s telepathic bits transplanted into his brain, empowering him to lead the latest anti-mutant hate wave. This bogs down in the usual mutant cliches, and I don’t see what this version of the Skull (a clone in suspended animation since 1942) brings to the table (I don’t know what last happened to the regular Red Skull, but I don’t believe for a minute there’s a death he can’t cheat.).
BATMAN: THE DARK KNIGHT: Cycle of Violence by Greg Hurwich and David Finch has the Scarecrow murdering children and launching a fear-gas attack on Gotham City for no particular reason other than he’s crazy. Oh, and crazy because of child abuse which is a horrible cliche. The revised origin of the Bat in the final issue in this collection didn’t work for me either—the Bruce Wayne shown investigating his parents’ death feels more like someone about to grow up into a millionaire playboy detective a la Lord Peter Wimsey than the Caped Crusader.
BPRD: Vampire by Mike Mignola, Fabio Moon and Gabriel Ba is a follow-up on Anders, the agent who in BPRD: 1947 gets possessed by the spirits of sister vampires. Tormented by the possession, he sets out on a vampire-hunting trip in Central Europe only to discover the opposition is, of course, tougher than expected. Middling for this mythos—at the climax, for instance, the art really left me confused who was fighting whom.
BATMAN: The Long Halloween by Jeph Loeb and Tim Sale got a lot of attention at the time as Batman in his early days tries to stop a killer systematically murdering members of Gotham’s top crime family, while coping with the rise of newer, more bizarre criminals. Meeting it for the first time now, I find it readable, but not memorable, with too many plot holes (why exactly does one man throw acid in Harvey Dent’s face in this retelling of Two-Face’s origin?) and some awkward art (the grotesquerie works on the villains, but not when Sale draws Alfred equally weird). 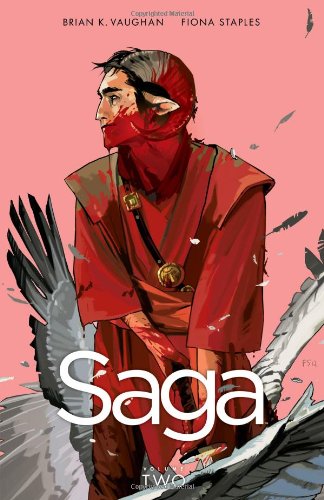 SAGA Vol. 2 by Brian Azzarello and Fiona Staples (cover by Staples, rights with current holder) continues the charm of the first volume as baby Hazel and her family struggle to stay one step ahead of their enemies (which now include Marko’s ex, Gwendolyn) while in flashback we learn how Marko and Alanna came to be a couple. A real winner.