One book, one movie, one crime of the century

As I didn’t get much read last week, I thought I’d pair the nonfiction book I did finish with a movie based on the same topic, Harry Thaw’s murder of legendary architect Stanford White in 1906 and the events that up to it. Despite the movie’s insistence in the opening narrative crawl that it took its story from the trial transcripts and interviews, I’m not surprised the script plays fast and loose with the facts, though I am surprised at the sexism. 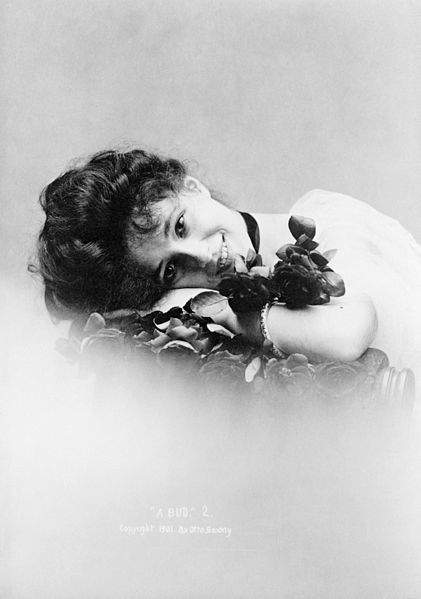 First, the backstory. Sixteen year old chorus girl Evelyn Nesbit became a guest at the home of Stanford White, cheerfully riding on the red-velvet swing in his apartment and oblivious this let him stare up her dress. White subsequently drugged and raped Nesbit (left, in a photo by Sarony Studios), though her mother convinced Evelyn to stay with him (he was a very generous patron). After a couple of years, Nesbit learned White had other lovers and broke it off. She married the very wealthy Harry Thaw, who upon learning about the rape gunned down White at Madison Square Gardens (which White had designed).

THE GIRL ON THE VELVET SWING: Sex, Murder and Madness at the Dawn of the Twentieth Century by Simon Baatz feels remarkably contemporary in its retelling. Like several #metoo targets, White comes off as a calculating predator, encouraging more experienced chorines to bring him girls like Nesbit, winning her trust, then slipping her the knockout drops (and afterwards assuring her nothing bad had happened, all the chorus girls did things like this). Likewise Thaw’s trial includes a jailhouse snitch (an attorney who offered to destroy Nesbit’s credibility in return for the prosecution dropping an indictment against him) and doctors willing to find Thaw insane for the right price (Thaw initially claimed he had the right to avenge his wife, which got him a hung jury; only after that did he settle for insanity).

The story still didn’t grab me. In contrast to the racist elements and injustice covered in Honor Killing, this is a fairly straightforward story of sex and scandal, nowhere near as shocking as it must have been back then. Nor does Baatz get into the era as much as I’d have liked — the sex lives of other chorines, whether White was an outlier or unremarkable for his era and class, etc. The high point was after Thaw escapes the asylum and flees to Canada, leading to such oddities as the American cops trying to get him out of jail with a writ of habeas corpus (a tactic usually used against police, not on their behalf).

THE GIRL IN THE RED VELVET SWING (1955) presents White (Ray Milland) as an innocent party in all this; sure, he falls in love with Evelyn (Joan Collins) the moment he sees her, but he’s a gentleman and refuses to betray his wife (they only acknowledge in passing that he had other lovers)! But even though he resists, in the end the little minx seduces him, oh how tormented he feels! Enter Thaw (Farley Grainger), an unstable man obsessed with the way White socially outclasses him, gets the best reservations and is just a superior guy; his pursuit of Evelyn is simply because White once possessed her. The rape is a delusion Thaw forces Evelyn to agree with, so Thaw can rationalize that he wasn’t first.

But even Thaw is a woman’s fault; his mother (Cornelia Otis Skinner) tells Evelyn that after accidentally smothering her first son as an infant, she tried to overcompensate by smothering Thaw with love (“The womb in which he grew was a chamber of horrors!”). This was what the 1950s called “momism,” the idea that overpossessive, overprotective mothers destroyed their sons’ lives — though of course, not being possessive and protective enough would destroy them too.

The ending, which shows Evelyn working in a show barely above burlesque for a leering crowd of men seems to be meant as punishment for the little slut who got White killed. And ignores that she went on after the murder to have a successful vaudeville and film career. It’s interesting to see how in ignoring the facts, the writers made the women look as bad as possible and the old lecher look innocent.

3 responses to “One book, one movie, one crime of the century”