So for the first time since 2015, we made it to Dragoncon, the massive Atlanta event over Labor Day weekend. We probably wouldn’t have made the trip, but TYG somehow snagged a room at the Indigo, a new hotel. Pricier than the one we previously stayed in, but very centrally located, with an easy walk to the 24-hour drug store, the food court, the vendor building, the Westin and the Hyatt. Oh, and a Starbucks two doors down. 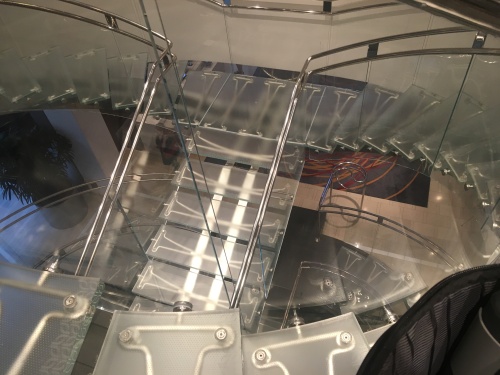 As you can see, it’s new and gleaming and pretty, particularly the stairway in the lobby.

The view from our window wasn’t stunning, but we liked our room nonetheless.

As usual, I approached this as a business trip, attending a lot of writer-track panels covering using the supernatural in alternate history, writing nonfiction about specfic (which I do already, of course, but I’d be happy to monetize it better), secrets of the bestseller authors, etc. I forgot that in trips past I’ve found most of the panels too basic to be useful.  This time, they were pretty much all that way. Which is not a fault in them — I’m sure lots of the audience found them useful — but not much help to me. And inevitably there was the one panel where someone meandered off topics into a general My Life As A Writer discussion.

I did have fun with a panel with the Black Lightning cast. Christine Adams, who plays Lyn, is actually English, and said the toughest thing about her role is having to say medical technobabble in an American accent. Marvin Jones III who plays Tobias, really is an albino; he said when he read the script he figured the role was tailor-made for him, and was quite surprised to learn how many others were considered. He’s also a long-time comics fan, very conscious that there’s a history of great DC villains he wants to live up to. The Lost Girls panel was fun too (Anna Silk is very perky), particularly when they discussed their Wikipedia pages (“I’m a country singer?”). 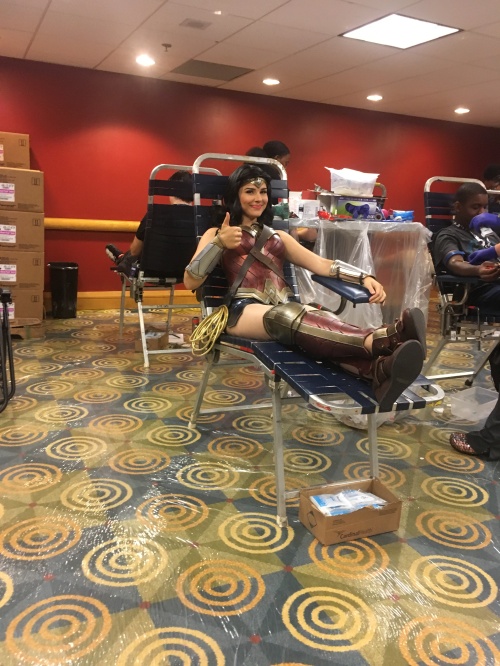 The best fun, though, was cosplay and people-watching, catching up with various friends, and spending lots of time with TYG. Due to her work schedule we don’t have as much hang-out time at home as we used to (I don’t count sitting in the living room while one or both of us work as hanging out) so this was really pleasant. It wouldn’t be half so much fun if she hadn’t been here.

The cosplay included lots more Wonder Woman and Amazons than the last time we went. Also quite a bit of Spider-Gwen. The best moment was when I recognized a black man in a coolie hat as cosplaying The Last Dragon; his eyes lit up and he shook my hand, so I’m guessing most people didn’t recognize the outfit.

Two points where I improved on our last Dragoncon trip: rather than bottled water, i brought a collapsible water bottle that squishes down to the size of my first for stuffing into suitcases. And I found a good trail mix recipe: cup of sunflower seeds, cup of pecans, cup of dried pineapple, cup of Chex, 1/2 cup of chocolate-covered raisins, mixed and broken into half-cup helpings. That cut down at least a little on snacking.

I’m going to apply as a guest for 2019; lord knows there were a couple of panels (like time-travel films) I could have contributed to this year. I doubt I’ll make it, but who knows?

2 responses to “Here there be Dragoncons”