Is Our Writers Learning? Meddling Kids by Edgar Cantero 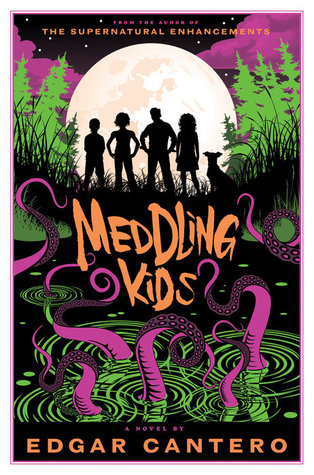 What if Scooby Doo and his friends found themselves faced with Lovecraftian horror? That’s the premise of MEDDLING KIDS which meshes the Scooby team with The Case of Charles Dexter Ward.

THE STORY: Thirteen years ago, a group of teen ghostbusters and their dog exposed the latest supernatural threat to Blyton Hills as once again a guy in a monster suit (who sneers he’d have succeeded if not for — well, you know). Only deep down they sense something darker, a knowledge that’s tortured them ever since. Now Nick’s in a mental hospital, Peter’s dead, kid genius Kerri is tending bar and tomboy Andy is ex-military with some open warrants out on her. Andy brings them back together with their dog Sean’s grandson to unearth the final secret of the spooky mansion.

Sometimes it’s better if pastiches aren’t too close. Unlike some Scooby-Doo takeoffs I’ve seen, this doesn’t map them exactly onto the characters. Which isn’t surprising as Cantero originally based them on a British creation by Enid Blyton (hence Blyton Hills), the Famous Five (Andy is very much a grown-up version of tomboy George). When American publishers gave him a blank stare, Cantero put it as “Scooby Doo meets Lovecraft” and closed the deal (Kerri is recognizably a mix of Velma’s brains with Daphne’s looks).

It’s probably stronger for not being too Scooby-Doo.

Sustaining a premise is hard. The early chapters capture the feel of grown-up kid detectives taking on the supernatural. After that … well, the kid detective part faded too much for me. They could as easily have been the kids of King’s It, or any dispirited group of former friends (The Big Supernatural Chill, if you like). That kind of disappointed me.

Omniscient POV is sometimes a mistake. It’s obvious advantage is that it lets Cantero write with more poetry than if he’d gotten into multiple close-up points of view. But I found it really distancing. The characters are going through an emotional wringer — reuniting, working out their past issues, facing unspeakable horrors — but the writing’s so detached I can’t really connect as much as I’d like.

This is a particular problem with the scenes where Nick explains the Lovecraft mythos (or this book’s version). It’s nothing new to me, or I suspect to lots of other readers, so a big chunk of exposition is a minus. It works in HPL’s stories because no matter how many I read, he always infuses his horrors with, well, horror. Here it’s closer to a Wikipedia entry.

By about halfway through I was disengaging. By the end I’d lost almost all interest, I just finished it to see if it improved (no). I’ve actually had more fun with some of the TV show’s The Monsters Are Real seasons such as 13 Ghosts of Scooby Doo and Scooby Doo: Mystery Incorporated.

#SFWApro. Jacket Design: Michael J. Windsor, all rights remain with current holder (as an aside, I wonder if the growing number of professionally published books with covers designed out of public-domain elements means cover artists are another field losing ground to digital technology?).

Filed under Is Our Writers Learning?, Writing