Trump’s idea of “the best and brightest”

Back in 2016, a former FB friend of mine (rape-apologist trolling is a fast way to get yourself unfriended) argued we didn’t need to worry about Trump being a vainglorious dumbass. He was a smart, Big Apple businessman: he knew how to hire the best people, they’d make up for Trump’s shortcomings.

Like so many rationale for why Trump was the right choice, it’s bullshit. Let’s look at some examples:

First of course, as you probably all know, we have Staff Secretary Rob Porter. His alleged history of spousal abuse was enough to keep him from getting a security clearance. (apparently lots of Trumpites working with classified material do not have clearance). But Trump hired him anyway — after all, Porter denied the charges! How could they have known? Even John Kelly, The Grownup In The Room supported Porter — and as LGM points out at the second link, what does it say about Trump hiring the best people that everyone accepts the White House needs a grown-up in the room? Of course, Trump himself says Porter is awesome and besides, Porter said he was innocent! I’m sure the latest White House abuser says the same thing. Though as LGM points out, Trump doesn’t care about innocence when it’s Clinton or black men rather than white male abusers.

Vice President Mike Pence, meanwhile, tries to pretend he and  President Shit-Gibbon really care about spouse abuse (newsflash: a lot of religious conservatives don’t). He also indignantly denied his support for “conversion therapy” when he was called out by a gay Olympic athlete. More here.

Trump lickspittle Kellyanne Conway is head of the White House opioids response team. Her response? Ignore experts and rely on political appointees. Of course Conway’s a political hack herself whose highest career accomplishment is toadying to the white supremacist in the Oval Office, so it’s not surprising — but it’s still horrifying. We’re seeing hundreds of deaths from this thing, and Trump’s crew of the Best People doesn’t give a damn.

Kentucky Republican and Trump backer Timothy Nolan has been charged with forcing women to sleep with him, using everything from threats to money to calls to their probation officer. He’s pleaded guilty.

As for Trump’s decisive ability to bellow You’re Fired at his people just like he did on The Apprentice — well, no. Though apparently the blame for the Porter fiasco is somehow settling on Porter’s current girlfriend. And President Shit-Gibbon is quite happy to punish legal immigrants who use federal services by making it harder for them to get a green card.

It would almost be funny if this incompetent and morally bankrupt hacks weren’t running the country and getting loyal support from Republicans in Congress. They own this as much as Trump does. So let’s look at the rest of the right wing: 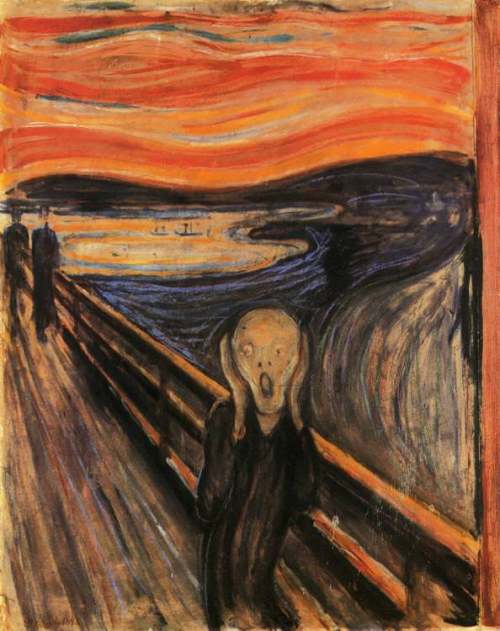 They hate that conservative kids might be exposed to liberal ideas in college.

Right-wing liar David Barton claims Obama designated him an enemy of the state. And a right-wing Christian pastor claims the Trumps had to exorcise Obama’s literally demonic influence.

A Fox News executive objects to the Olympic team being too dark and too gay.

An armed Trump supporter asked a Navajo legislator if he was a legal immigrant.

Remember when Republicans claimed cutting the deficit was the most vital mission on Earth? They lied.

And the Trump Consumer Finance Protection Bureau won’t do crap about firms that don’t guard our personal information.

A Trump supporter and Pizzagate believer is shocked anyone would say she pushes fake news.

And I’m inclined to agree with Lance Manion that if Trump’s biggest accomplishment is keeping America whiter, he’d be proud of that — as if FDR wanted to be remembered for the Japanese-American internment camps.

Rights to Edward Munch’s The Scream remain with current holder.

2 responses to “Trump’s idea of “the best and brightest””