All things considered, not a bad week (#SFWApro)

Before Wednesday’s root canal, I’d been guessing how I’d handle the rest of the day: would I feel up for writing? Or just huddle on the couch watching movies with the dogs (Trixie’s a huge fan of classic Italian neorealist cinema)? As it turned out I felt surprisingly good (as I said this morning, Dr. Robinson knows her stuff), but I decided to kick back and do nothing anyway.

Despite which it was a fairly productive week. I finished going over Southern Discomfort, breaking everything down chapter by chapter. Now hopefully I can start to rebuild it — not that it’s a shambles, but there is, unsurprisingly, much improvement needed. We’ll see if the breakdown helps.

I also finished rereading my old steampunk novel Questionable Minds. Other than a few minor changes it looks in great shape. Now I have to start thinking about the self-publishing thing seriously — well, and double-check to see if there are any new publishing houses that have cropped up.

I got my next Screen Rant in (actors who don’t get along with their families).  And I did some research for an older story, Oh, the Places You’ll Go! that needs heavy work. As it deals with maps, I hope reading about them will trigger some ideas.

No short story work, though, and no work on Undead Sexist Cliches. But I did finally make it to the new after-writers’ group bar and hang out. It’s really not that far to go, I’m happy to say.

To celebrate getting through the root canal, here’s footage from an old Crest commercial showing the Cavity Creeps attacking Toothpolis. Commercial here, all rights to image remain with current holder. 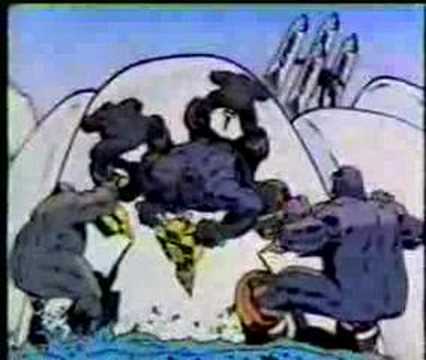