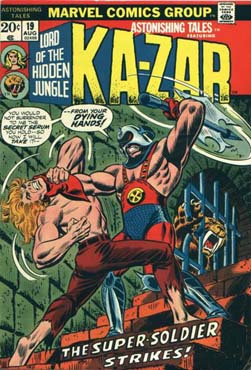 Once upon a time Steve Rogers was the only product of America’s Project Rebirth, the super-soldier research project. But as chronicled in my new Screen Rant, he’s not even the first super-soldier now (Protocide beat him). My article looks at most of the heroes and villains who got power from Rebirth, from Nazi metahumans to aging mad scientists. Victorius, the Super-Soldier on the John Romita cover here (all rights remain with current holder) is the latter, and I find him surprisingly interesting: a scientist who finally cracked the super-soldier formula, realized he’d spent his entire life cooped up in a laboratory and so used the formula to turn himself into Victorius, the Super Soldier! I guess at my age that seems a very plausible personal arc.