So last week the second season of NBC’s BLIND SPOT wrapped up. I wasn’t a big fan of S1, but this season seemed a marked improvement, making the unsatisfying season finish a disappointment. 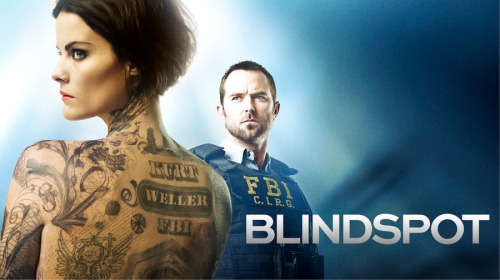 The premise of Blind Spot (all rights to image remain with current holder) is that Jane Doe (Jaime Alexander) shows up in Times Square amnesiac and covered with tattoos. All of which turn out to be complex clues to upcoming or ongoing federal crimes. So she winds up working with a special FBI task force run by Kurt Weller (the guy in back) as she’s also a deadly fighter, marksman, martial artist …  Over the course of the season we learn Jane has ties to a terrorist mastermind Shepard; her presence on the FBI is part of Shepard’s master plan; Jane herself signed off on becoming an amnesiac.

This season we learn more. Shepard is the leader of Sandstorm, a conspiracy that believes the American government has become utterly corrupt and must be destroyed. It turns out Weller is a part of Shepard’s plan, which involves something called the Truman Protocols and COGS. In the next to last S2 episode we learn (as do the cast) that COGS is the Continuity Of Government Subcommittee. Under the Truman Protocol, in the event of a major threat to the government, the COGS — deputy heads of various government agencies — are relocated to an underground bunker so that if the government takes a hit, they’re ready to rebuild. Weller realizes this is Shepard’s plan — an attack on Washington followed by this entirely new cadre of leaders (some of whom are, of course Sandstorm) taking over. Shepard has used the tattoos to manipulate the FBI and the government all along to activate the protocols.

Needless to say, in the following episode Shepard’s attack is averted, she goes down (Jane’s brother Roman escapes) and Jane and Weller finally act on their burning passion. Cut to two years later: Jane has left the FBI for undisclosed reason, but then Weller shows up to tell her that most of the team has been kidnapped — he needs her to find them. Oh, and he has a mysterious McGuffin that makes her tattoos glow … Cue S3 (which I imagine will be past/present alternating timelines a la Lost, Once Upon a Time, Arrow, Quantico).

After a solid season, I found the finish disappointing. Ratings were right on the edge for cancellation and it felt very much like they’d wrapped it up fast so that if the axe fell there would be no leftover issues. Which is good, but …

I think my biggest problem is that I simply can’t buy the entire two seasons were all part of a plan. Maybe with more explanation I could buy it, but like Silva in Skyfall, Shepard would have to be a precog or a time traveler to calculate exactly how this would all play out (I may be wrong but I’m not rewatching the show to find out).

The ending also doesn’t convince me why Shepard worked so hard to look out for Weller. S2 showed she’s been watching over him for years — that seems like an awful lot of work just to fill one slot in COGS. Though that’s easier to explain: maybe she took an interest in him independent of her agenda, and later slotted him into her big plan later. Still, its a flaw.

And last but not least, while the finish is certainly lively (can Patterson the nerd deactivate the doomsday weapon in time?) it seems that it left a lot of the emotional arcs (and there were quite a few of them) unfinished. We did get Weller/Jane but that wasn’t really an arc this season — it felt more like the simplest way to provide a convenient happy ending.

One response to “Blind Spots and satisfying endings (#SFWApro)”