Two women cops, a psycho family and the Death Star:TV and movies (#SFWApro)

FREQUENCY was one of two series not to receive full-season orders from the CW this year (a rare event), and I’m not surprised. Riffing off the terrific 2000 movie, this has present-day cop Raimy Sulliven (Peyton List) saving her dad’s life in 1996 through a ham-radio that talks across time. But further changes ripple out: Raimy never met her fiancee, and her mother died at the hands of the Nightingale Killer, a serial-murdering monster who was never caught. Can Raimy and father (Riley Smith) work to change things back?

This started well, but I lost interest fairly fast. The trouble is it’s 90 percent a straight cop show: Raimy’s dad is an undercover cop so we have lots about the dangers and moral compromises and wear and tear on his family life — if I wanted that, I’d see Chicago Blue or something. Nor is the time changing particularly clever, nor does the time difference bring much to the table — the 1990s just aren’t different enough in fashion or tech to give them a different feel (though Hindsight managed it). I will give them credit for a genuinely happy ending, but if this doesn’t come back (it’s speculated that if it does well streaming on Netflix, it’ll be renewed) I won’t weep any tears. “I washed them in holy water!”

I used the first season of  QUANTICO mostly as background while I worked on other stuff (I thought I’d reviewed it earlier in the season but can’t find the post, so maybe not). Alex Parrish (Priyanka Chopra) is an FBI rookie who’s been framed for a terrorist attack by a mysterious conspiracy. In the present, the struggles to clear her name and expose the mastermind behind it; in flashback, we follow her through training at Quantico, with the added hook that one of the people she met their is the real villain. I watched mostly because Chopra is hot, and while the show is otherwise watchable, it’s not worth making an effort to do so. And lord, they gush over how awesome the FBI is, what a bulwark against injustice it is (COINTELPRO? Never heard of it), and how incredible FBI training is (Efram Zimbalist Jr.’s old FBI series couldn’t be any more reverential). It’s probably telling that when someone raises questions about the FBI’s history of abuses, it’s the bad guy (I don’t think we’re supposed to take them seriously). So I won’t be back for S2. “You love America and you think it loves you back—but it never did.” 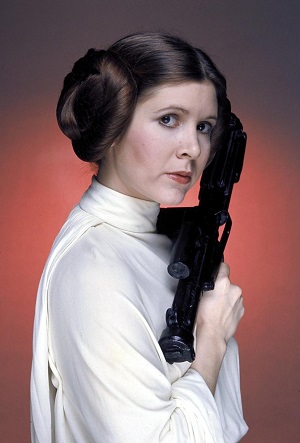 ROGUE ONE (2016) is, of course, the prequel wherein the discovery of a new imperial weapon (“He said it was a planet killer.”) forces a team of rebels to discover the Death Star’s one weakness(“I made myself indispensable so that I could incorporate a way to destroy it.”) and transmit it to the Rebel Alliance against all odds (I will say the final shot of Leia [all rights to image reside with current holder] at the end made me tear up a little). In the tradition of war films where the heroes may not make it out but they advance the war just the same.  With Alan Tudyk as a robot voice, Mads Mikkelson as the protagonist’s father, James Earl Jones as the voice of Darth Vader and Peter Cushing and Carrie Fisher resurrected digitally. “The Force always gathers darkly around a creature about to kill.”

One response to “Two women cops, a psycho family and the Death Star:TV and movies (#SFWApro)”