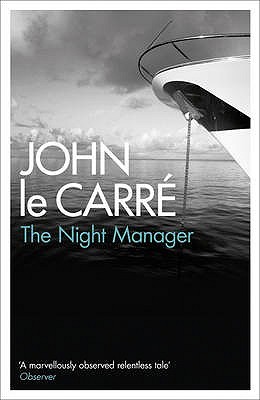 THE NIGHT MANAGER by John le Carré (cover credits unknown, all rights to current holder) gives us as protagonist Jonathan Pine, a military veteran working quietly in a Swiss hotel. Years ago his efforts to help British intelligence got a woman Pine cared for killed; when the shady millionaire responsible shows up at the hotel, Pine agrees to help British agents bring him down by infiltrating his inner circle. In contrast to the tentative post-Cold War optimism of The Secret Pilgrim, le Carré here is even more cynical than usual, as Pine’s mission is derailed not only by the usual turf wars but corruption, as the bad guy’s plan will line the pockets of many important people. Well written (“His life has consisted of a run of rehearsals for a play he had failed to take part in”) and absorbing, the only flaw is that Pine’s romance with Jeds, the bad guy’s mistress, is really flat and unconvincing.

So after reading a discussion related to our WW II internment of Japanese-Americans, I picked up INFAMY: The Shocking Story of the Japanese-American Internment in World War II by Richard Reeves. While I knew the broad outlines well enough — that despite a complete lack of evidence of any Japanese residents plotting against us, the government interned tens of thousands from a mix of racism, political calculation and greed (vested business interests were happy to get their land or eliminate them as competition)—a lot of the details surprised me, from the effect of the camps on teen social life (in the crowds it was easy to sneak away from parental supervision) to injustices I’d never heard of (like the 2,000 American citizens we traded to Japan in return for American POWs). The kind of story that makes me want to dig up a number of graves and defile the corpses.

ARE ITALIANS WHITE?: How Race Is Made in America is a collection of essays edited by Jennifer Guglielmo and Salvatore Salerno that concludes the answer is yes: while Italians were often considered inferior to Real Americans, there were no serious attempts to class them as colored, so they could gain citizenship, voting rights and other benefits black Americans were denied. The essays discuss the broad and diverse approach of Italians to the race question (from radicals who opposed all forms of racism to people who cemented their claim to be white by dumping on blacks) to individual profiles such as Giancarlo Esposito and his roles in Spike Lee’s films (he argues that Lee actually does a better job capturing Italian-American life than he does black).

GOTHAM ACADEMY: Calamity by Becky Cloonan and Brendan Fletcher has Olive and Maps meeting new student Damian Wayne, encountering a real-live Batboy and learning more about Olive’s super-villain mom, Calamity, than Olive really wants to know. This worked for me better than the first collection, though it’s still not quite to my taste. I am curious if all the villains on the academy staff (Professor Strange, Professor Milo, Kirk Langstrom) mean this is outside regular continuity.

AVENGERS ACADEMY: AvsX: by Christos Gage, Tom Grummett and Timothy Green II has Wolverine drop off some of his students during the Avengers vs. Xmen Big Event so that they won’t get caught up in the crossfire. That, of course, doesn’t work out as well as planned … This is much weaker than the other Academy TPBs, feeling rather like they’re just filling space until the event finishes. That said, it’s still got some good bits—apparently this series can make even a tedious crossover event look entertaining.