You Have Been in Afghanistan I Perceive: Rereading a Study in Scarlet (#SFWApro) 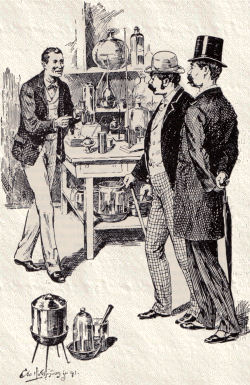 I don’t think it’s possible for me to appraise the first Sherlock Holmes story, A Study in Scarlet (image by George Hutchinson showing Holmes’ first meeting with Watson) with a clear eye.

I read the book for the first time when I was 11 or 12 and received a complete Holmes collection for Christmas. I fell in love with the books, and I still am now (and ditto with the Victorian setting). And a surprising number of quotes remain permanently wedged in my brain (even if they’re not verbatim):

•”When you have eliminated the impossible, whatever remains, however improbable, must be the truth.” [edited for accuracy]

•”If there is no better world after this one, life is a cruel jest.”

•”It is a capital mistake to theorize in advance of the facts.”

•”I refer you to the curious incident of the dog in the night-time.”

At the same time I’ve read A Study in Scarlet often enough that parts of it do feel a little familiar. So if I were a reader with similar taste to me but no familiarity with Holmes I might like the book better, or less, or the same. Isn’t that helpful?

Rereading it, the book certainly starts slow (it was, after all, written for an audience that didn’t have as much entertainment competing for their time). We get the condensed story of Watson’s military career, his listless life in London after leaving the army, then his encounter with a young man a mutual friend says has found rooms that would suit two people (and two incomes) very nicely. In the scene above, we get Holmes’ first-ever line, to Watson: “You have been in Afghanistan, I perceive?” The two move in together and Watson becomes intrigued by the strange parade of clients, from tide-waiters to Scotland Yard detectives, who visit his roommate before learning his profession as “consulting detective” — the man other detectives come to when they’re stumped. And before long, the Yard’s Gregson and Lestrade are indeed stumped, by the corpse of an American found in an empty house with “RACHE” scrawled on the wall overhead.

Once Holmes is on the case, things start happening. Holmes is a striking, dynamic character, memorable in a way that countless forgotten detectives (Professor Van Dusen, Dr. Thorndyke, Martin Hewitt) were not. Watching him on the trail is a pleasure. The story bogs down again when the villain is in custody and Doyle treats us to a flashback involving Mormons, the sex slavery they supposedly used to fill their “harems” (the Victorians had a prurient fixation on Mormon polygamy), and the Mormon inquisition that supposedly down those who betray the faith (the anti-Mormon bigotry is much more disturbing than I found it as a kid).

As a writer, it’s interesting to see Doyle still figuring out his leading man at this point. He emphasizes that Holmes has absolutely no interest in stuff unrelated to his profession, such as literature or the Copernican theory; that idea would be dropped in later stories, which show Holmes as a polymath expert in all manner of unrelated stuff. There’s also a reference to Watson having a dog, but we never see it, and like the dog in Blood Simple, it’s never referenced again. For that matter the “consulting detective” idea didn’t stick, as Holmes routinely takes regular clients, not just fellow detectives.

I also looked up various details in two outstanding references. The Encylopedia Sherlockiana explains so many of the Victorian terms that now sound alien (gasogene, barouche) as well as providing biographies of the various characters. The W.S. Baring-Gould Annotated Sherlock Holmes provides similar information (though as it’s in the form of story footnotes, it’s not as easy to look up) plus musings on dates, background details and attempted retcons of Doyle’s many inconsistencies (Watson’s wounded in the leg here, but a later story refers to his shoulder). They also make useful resources for Victorian-set fiction—I’ve used the Encyclopedia myself in writing Questionable Minds (I’d forgotten until now how good the Baring-Gould book is).

Study certainly isn’t Doyle’s best work. But even at his worst, there’s no place like Holmes.

8 responses to “You Have Been in Afghanistan I Perceive: Rereading a Study in Scarlet (#SFWApro)”