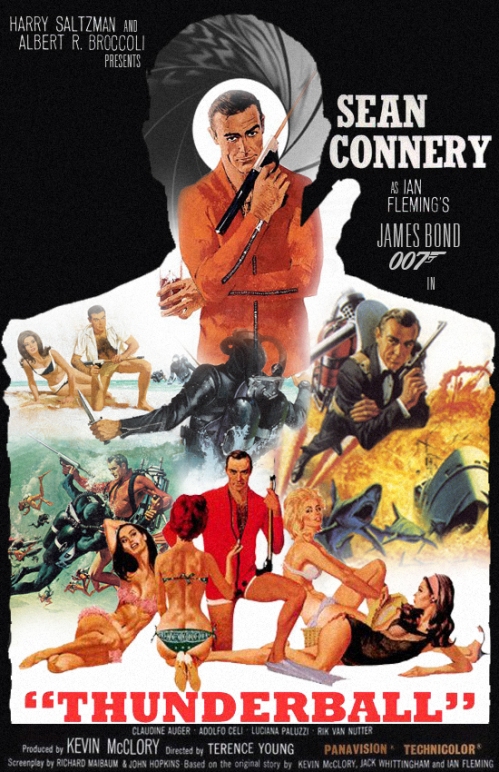 Rewatching THUNDERBALL (1965) it’s easy to see that it’s the original SPECTRE film (it’s based on an unsuccessful film script Fleming wrote with Kevin McClory that Fleming then novelized). All rights to image remain with current holder.

In Dr. No, SPECTRE only figures late in the game, when No reveals who he’s working for. In this film, early on, Largo (Adolfo Celi), SPECTRE’s Number Two, reports to a SPECTRE board meeting. Here we listen to members report on their various projects including blackmail, murder and drug-dealing; in a nice touch, there’s a reference to assassinating a French scientist who defected to the USSR, showing SPECTRE really doesn’t take sides in the Cold War. We also learn Largo’s project involves stealing a nuclear-armed fighter from NATO then blackmailing the US and UK into a $100 million payoff. All of this is observed by an effectively creepy half-hidden Number One (edited because I said he was creepier than Donald Pleasance in You Only Live Twice, and on rewatching that realized I was wrong) who demonstrates how little patience he has with failure.

Another distinctive SPECTRE element is that agents wear rings with a distinctive octopus symbol (the octopus was a popular symbol for years for sinister, grasping organizations). I presume it was part of the original concept for the group, but it wasn’t seen in the previous films, or IIRC in any of the later ones until Daniel Craig’s Spectre.

The treatment of the Bond girls of the film is interesting. Well not so much Domino (Claudine Auger), Largo’s mistress, who’s a standard Bond Girl except for killing Largo at the climax (revenge for him killing her brother). But then there’s Patricia (Molly Peters), a masseuse at the health spa where Bond is recuperating at the start of the film (it’s where he stumbles over SPECTRE’s scheme). Like Pussy Galore in Goldfinger, she physically pushes Bond away when he tries groping her. After a SPECTRE agent sets one of the spa machines to kill Bond, however, Patricia is horrified she’ll be blamed. Rather than tell her who’s at fault, Bond uses her fear to pressure her into putting out. It’s an unpleasant, ugly scene even though (of course) she really enjoys it (the film emphasizes her dismay when Bond abruptly dumps her afterwards).

Martine Beswick is Paula, a British agent assisting Bond (her second role in the series following From Russia With Love). The relationship is surprisingly professional—he doesn’t try to bed her, she’s not asking—but perhaps unsurprisingly she winds up dead. Finally we have Fiona Volpe (Luciana Paluzzi), a SPECTRE agent who kills without a qualm, seduces Bond to trap him—he describes her as so wild in bed, she should be caged in a zoo—and sneers at the very idea Bond’s sexual prowess can turn her. Unsurprisingly she dies too.

The sneering scene surprised me when I last watched this because the only Bad Girl Bond had really turned was Pussy Galore (Tatiana in From Russia With Love is more neutral than bad). I think it’s a sign of how quickly the Bond formula had become accepted in pop culture. Similarly, he gets away in the teaser by use of a gimmick car without any explanation for why his car has bulletproof shields and water cannons. No explanation is needed.

Unlike Goldfinger, Bond is once again respectful of M, and there’s no boinking Domino at the end. The CIA picks up Bond and Domino and carries them to safety, though sex is clearly in the offing for later.

As far as quality goes, this is a big drop from Goldfinger. The guest cast isn’t as strong (Largo’s killers are a bland lot, unlike Oddjob), and the movie is slower and more episodic than its predecessors. The fight scenes are getting bigger, but not better and the climax is flat: Bond’s not fighting alone but part of a full NATO assault on the bad guys, and the final showdown with Largo comes after the nuclear threat is canceled out.

It’s not an unwatchable film, but the Connery years have now passed their peak.

Filed under Movies, Sex for Dinner, Death for Breakfast