Like I said yesterday, I’m pretty much done, though there may be some films I want to watch again or obscurities that I stumble across.

Case in point, I rewatched THE MILKY WAY (1969) because while foreign non-Japanese films go in the appendix, Luis Buñuel is a significant enough director I thought it might be worthwhile including it in the body of the book. But no—if anything the time-travel element is even slighter than I first thought, and the endless religious debates are more like a series of sketches than a film (and in the words of Monty Python, they come very close to “clever people talking loudly in restaurants” rather than deep insight). So appendix it is.

While I don’t normally include trapped-in-the-world-of-a-movie stories like Teen Beach Movie, JETT JACKSON: THE MOVIE (2001)seems more like an actual parallel world story where teen actor Jett (Lee Thompson Young) and his super-spy character Silverstone trade worlds a la Quest for Love. In addition to the usual cross-time confusions, Jett has to cope with being the one person who can thwart mad scientist Michael Ironsides; Silverstone discovers what it’s like to have a normal teen life. Most of what results is fairly stock (I imagine fans of the series had more fun with it) but I think it qualifies. “Your molecules will be so scattered it’ll take fifteen years just to put together a toenail.” 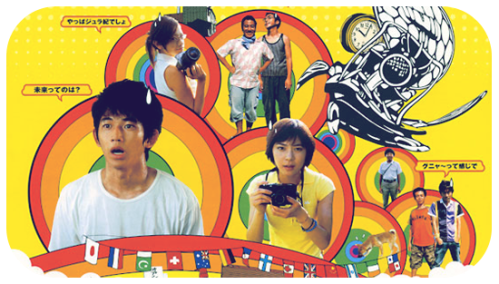 I can’t exactly say I watched SUMMER TIME MACHINE BLUES (2005) as the only full version of this Japanese movie I found on YouTube was subtitled for Eastern Europe. However that was enough to confirm the essence of the online reviews I led, that this concerns a group of college students desperate to change the immediate past so that they can prevent their clubhouse air-conditioner from going on the fritz. Looks like it might be fun to catch for real some time. All rights to image with current holder.

CARNIVALE (2000) is another I had to catch in the original language (French),a s a group of kids playing in an abandoned boardwalk park discover time suddenly rewinding so the park lives again … but it’s full of evil … I’m not sure this is really time-travel as from the visuals it could just as easily be a regular haunted carnival that comes to life when victims are near. However most references list it as time travel, so it goes in the appendix

GIRL 27 (2007) is the story of Pat Douglas, an MGM extra who was raped at a big event for MGM’s sales team, then discovered that trying to get justice in Hollywood was a futile endeavor when going up against a major studio (“Her lawyer didn’t even appear in court.”). This didn’t hook me as much as it should have, primarily because the filmmaker spends so much time on himself and other talking heads being Shocked, Shocked and Appalled that such an injustice could happen. I was also hoping this would show the workings of studio fixers such as the real Eddie Mannix (fictionalized in Hail Caesar)who handled these little problems, but no—and without that, there’s nothing that actually makes this case stand out (not that it isn’t awful, but it’s no different from countless other cases). “Oh you’re just a little mortal sin.”

SARAH’S KEY (2010) has Paris-living expat Kristin Scott-Thomas discover that the in-laws’ apartment she and her husband moved into may have been taken from Jews swept up in the expulsion of 1942, which sets her obsessively searching for the lost family. The modern side of this is good, but it’s intercut with the young daughter of the Jewish family coping with the Horrors of the Holocaust and that part was too stock for me. “We apologize on behalf of the youth of today.”

One response to “My final time travel movie post? (#SFWApro)”