I didn’t time-travel much this week (#SFWApro)

But here’s what I got.

Another Christmas, another do-over—EVE’S CHRISTMAS (2004) has a marketing whiz’s drunken Christmas wish send her back in time eight years to discover What If she’d gone through with her impending marriage instead of ditching her bridegroom for a career in the Big Apple. Like Hindsight, full of 1990s nostalgia, though not to the same extent (and also like that show, Eve wins by her foreknowledge of Internet marketing). Watchable, but I had half-wondered if there wouldn’t be a twist of her bridegroom having gotten the same wish (i.e., he’d always regretted not following her to New York). “He goes out of business in six months—some Seattle coffee company sues him for stealing their ideas.” 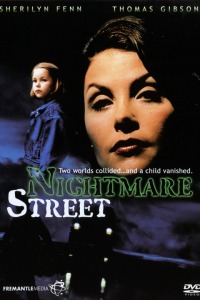 I almost didn’t bother to rewatch 1998’s NIGHTMARE STREET (all rights to image reside with current holder) as I have the plot synopsized in my Cyborgs, Santa Claus and Satan, but I’m glad I made the effort. What the synopsis doesn’t convey is that this is a very dark parallel world story, as Sherilynn Fenn’s sense of confusion at everything in her life being different, including her name, is presented as nightmarish if not insane, where it’s usually a source of wacky comedy. Fenn plays a woman who trades places with her parallel world counterpart only to discover she’s a malevolent sociopath (so the thought of her playing Mom to Fenn’s little girl just adds to the tension). This would double-bill well with Quest for Love for a similar swap with a loathsome counterpart (I was amused recently when an author touted this as her big breakthrough idea—not to say the book will be bad, but it’s definitely not new).“If you go back to that house you’ll either end up in jail or a lunatic asylum.”

CAVEGIRL (1985) is a dreadful sexploitative comedy in which a nerdy paleontologist goes back in time and falls for a hot cro-magnon babe in between supposedly hysterical comic bits (most of which could be switched to White Man And Ignorant Colonial Subjects without missing a beat). Even the cliched nerd/jerk confrontations at the school don’t work well. “So you’re saying they eat? Everyone eats.”

THE PLACE PROMISED IN OUR EARLY DAYS (2004) is a moody anime set in an alternative timeline where the US and USSR have divided Japan, and the only reason Russia’s experiments in parallel-world probing haven’t sucked up the entire island is that one teenage girl’s mind has absorbed the dimensional energy, leaving her trapped in an alternate universe. This goes in the appendix because the actual parallel world aspect is minor—the Russian tech could be any weapon. “Just as a person dreams at night, so does the universe dream.”

FATHERLAND (1994) adapts Robert Harris’ alternate history to show Nazi officer Rutger Hauer and American journalist Miranda Richardson discover the reason for a serious of deaths in the German hierarchy is Hitler’s determination to cover up any evidence of the Holocaust for fear it would squelch a possible American alliance against Russia. Well done, though considerably more upbeat than the novel, which left it ambiguous whether the US would learn, let alone respond to the truth—here one glance at the secret file is enough to kill Kennedy’s interest in meeting der Fuehrer. “What’s so special about you, Gene? Why do you show up when good cops go under?”