NEMESIS 2: Nebula (1995) is a sequel to a film called Nemesis, set in a cyborg-controlled near-future. In this grade-z Terminator knockoff (which god help me has two more sequels), a genetically engineered superwoman (bodybuilder Sue Price) sent back to the past to save her from the cyborgs has a movie-as-videogame shooting war with the cyborg hunting her across the African desert, with rebels and brigands providing added cannon fodder or obstacles (I could have done without the multiple scenes of Dark Skinned Men Lusting For White Women). Deadly dull. “You don’t think I liked it?” 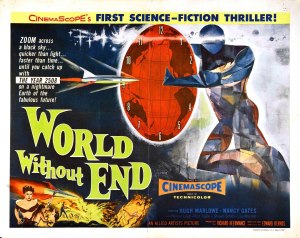 WORLD WITHOUT END (1956) actually got sued by the H.G. Wells estate on the grounds it was too close to Wells’ Time Machine [edit: no, my editor at McFarland says that’s not true] with its depiction of a future divided between enlightened but effete true humans and the belligerent Mutates outside. Rod Taylor (yes, the same guy later in The Time Machine) and Hugh Marlowe are the space travelers hurled into the future and attempting to rouse the humans from their complacency, while dealing with the advances of lustful future women. Not an A-lister, though it strongly influenced such later films as Beyond the Time Barrier. However the happy ending in which the children of all branches of humanity join together is quite neat.   “Our women seem to have lagged behind in their evolution into reasonable creatures.”

THE TIME TRAVELERS (1964) is one of the films influenced by World, using the same themes to much less effect: an experimental time viewer sends four present-day researchers into the nuclear-ravaged 22nd century, where they’re once again caught between mutants (here just bald and scars—at least the preceding movie made them look interesting) and a dying, apathetic civilization. Very talky—it reminds me of the quip in the Time Machine novel about how many visitors to the future find someone willing to explain how the sewers work—and quite dull. Probably an influence in turn on Journey to the Center of Time, which has the same ending premise (time travelers return to find their previous selves frozen temporally). “It isn’t desire—it’s bitter necessity.”

VIRGIN HUNTERS (1994)is a lame attempt at erotica, opening in a 21st century where repressed Morgan Fairchild has banned all sex, then sending two teenage boys back to stop her creating that dystopia. As Fairchild in the present is running a girls’ school, the guys wind up watching girls shower and undress, plus finally learning what that sex stuff is all about, while having to dodge a Terminator-type killer, then solving two problems at once by having the Terminator give Fairchild a good screwing to loosen her up (this may be the most sexist film I’ve seen for the book, though Premature runs it close). I’m inclined to suggest a double-bill with Spirit of 76 for another future where democracy has been forgotten.  “Our mission is to prevent the corporate takeover of this planet and the banning of sex between consenting adults.”

THE DOOMSDAY MACHINE (1967) is a non-time travel film (I think it got into my queue by mistake), wherein a team of astronauts discover their mission to Venus has not only been rescheduled for now, half the crew have been switched with good-looking astronauts. Even after they learn China has activated a super-weapon to destroy the world, it doesn’t seem to take why the US might send a mixed-gender crew off world in a rush … A mediocre film that didn’t come out until the early 1970s, when the sex aspects must have seemed weirdly anachronistic. “I can’t get over it—putting females together with the male animal in a cage like this.”