A reboot too far? (#SFWApro)

One of the problems with any sort of reboot is just how far you can reboot someone before going “Maybe I should just make up a new character.”

I’ve written before that I have mixed feelings about the Wonder Woman reboot in the New 52 for just that reason. In its own right, the story of a woman who discovers she’s the daughter of Zeus and gets involved in the Olympians’ power struggles is very good, but it has almost nothing to do with anything I’d recognize as Wonder Woman (different origin, different supporting cast, almost completely removed from human affairs). Greg Rucka did much better giving us something new (and a lot of Olympian action) while recognizably Princess Diana of the Amazons. Admittedly, DC has often done this with its female heroes, but that’s no excuse. 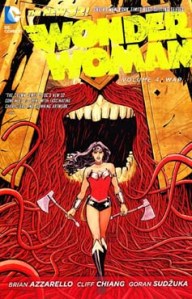 In the fourth volume of Brian Azzarello and Cliff Chiang’s reboot series, what they’ve done to Wonder Woman pales compared to how they’ve handled Orion of the New Gods (cover by Chiang, rights with current holder)

Orion first appeared in Jack Kirby’s New Gods 45 years ago or so. Born on the hellhole of Apokalips, raised in the peaceful haven of New Genesis, he had a nature of raw, savage battle fury, layered over with compassion and a desire not to fight.

The Azzarello/Chiang Orion is … a tough guy who wandered out of the same era but from a crime movie or TV show rather than Kirby. One of those shows where the firebrand feminist is paired up with a sexist jerk who keeps dropping double-entendres, leers at her, slaps her fanny (that’s not in this volume, Orion did it when they first met) and calls her “legs.” And at one point tells her she needn’t feel bad about criticizing him because he wasn’t listening.

This log is what Azzarello considers a “three dimensional character.”

My distaste isn’t just that this is so far removed from any version of Orion ever, it’s that it doesn’t work at all (I can’t think of anything outside of a retro cop movie where it would work, and probably not there, either). The idea of sticking the strong, competent female lead with a sexist jerk is so old it’s got whiskers. It doesn’t generate fireworks, or chemistry, or conflict, it makes me wish Orion would shut up. Or go back to New Genesis and stay there. I’m way past the point at which this kind of sexism is amusing or having Diana put Orion in his place (she does at one point, but only after kissing him) is entertaining. At all.

And while I’m not the New Gods’ biggest fan, Orion is just incredibly mundane when written this way. Not enough of a god of war, way too much of a frat boy. I keep wondering if Azzarello is a fan of Star Trek’s Trelane—did Orion grow up watching 1970s TV and modeling himself on it?

His father, Highfather, isn’t as objectionable, but he’s written just as unimaginatively. Kirby’s Highfather had some real kindness; Azzarello’s is a creep who in telling Orion to do as he’s told that a dog that won’t obey is useless. There’s no shortage of arrogant, overbearing godly fathers in comics (the MU’s Odin and Zeus for two)—I could have done without another one.

Thanks to Durham Library for stocking this, so that I didn’t spend my own money on it.