Is Our Writers Learning? Libriomancer by Jim Hines (#SFWApro) 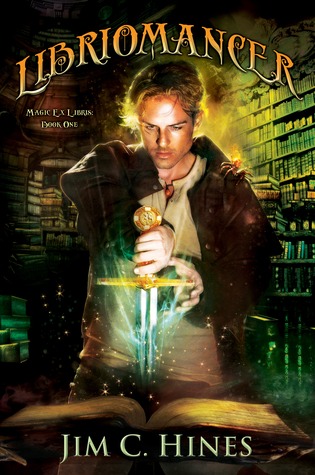 I’m about two months behind in this series (for anyone new to this blog I read one current genre book each month to see what I can learn) but here we go catching up.
The Premise: Books really are magic. Libriomancers, an order of mages founded by Johann Gutenberg, can use the energy generated by countless people reading identical printed copies of a book to pull items out of the book into reality. Unfortunately untrained libriomancers can do it accidentally, getting vampirized while reading Meyer or Stoker for instance, so the order works to contain this kind of magic.
Protagonist Isaac had a disastrous field mission a couple of years back so now he’s a cataloguer, recording where useful items can be found in different books so that agents can grab gear fast. Then one day the dryad warrior Lena and a bunch of sparkly vampires show up at his library. The vamps attack him, Lena saves him. It turns out some kind of rogue libriomancer is attacking the order, fomenting a vamp/order war and has kidnapped the immortal Gutenberg. By lack of anyone else, Isaac gets pulled back in the field.
The Magic: While the premise could easily get cutesy, Hines keeps it under control. He also does a reasonably good job explaining why nobody can pull out the One Ring or similar super-weapons (libriomancers can “lock” books to prevent that). The explanations get a bit infodumpy in spots, but not insufferably so. And while I often get frustrated when writers make up their own magic system then GASP that the rules of magic are broken, that didn’t bother me here—possibly because “pull shit out of books” feels like such a natural premise.
Unfortunately, “reasonably good job” still leaves holes to drive trucks through. If Isaac can use the love magnet from the Oz books, why not Ozma’s magic picture, which would allow him to locate Gutenberg instantly? Or her magic belt, which lets you shapeshift, polymorph other and teleport? And the explanation for Gutenberg’s immortality—he used his printed Bibles to draw out the Holy Grail from the last supper—doesn’t work at all. In the Bible it’s just a wine cup; he’d need the Arthurian romances for this (and even there, there’s no indication it makes you immortal IIRC).
The Vampires: I love the idea of Twilight vamps co-existing alongside classic horror vamps and presumably all the other kind. Yet somehow we still end up with Isaac facing a sinister alliance of vampires interchangeable with Harry Dresden’s Red Court. That’s disappointing. Also I thought treating them as species (Sanguinarius Stokeri, Sanguinarius Meyerii, etc.) was way too clever—I’d expect people to just label them as “a Stoker,” say.
What I Learned: The most useful thing is to see how Hines tosses off references to Isaac’s past experiences. It seems like a lot of the time when I make references of that sort in my own work, everyone gets confused, but here it works fine. I think that may be because he either goes into detail about what he’s referring to or it’s something irrelevant he can just toss off and readers don’t really need to know (like a passing comment about chasing a weresquirrel with a chainsaw). I have a feeling my backstory references fall awkwardly between those two poles. I shall watch for that.
•Despite what I said above elaborate debates about made-up rules still annoy me. Lena falls in love with Isaac because it’s her dryad nature; he’s worried that therefore she’s not in a position to give anything you can call consent. Which is an excellent thought, but discussing at length what he should do just bored me—I kept wishing he’d left her free-willed so we could save on all the angsty debate (though the resolution was quite ingenious). The lesson for me is to avoid the same (I may be the only bothered by this, but I’ll be happier with my own work that way).
It’s a good book and I look forward to the sequel. And I learned something. So chalk this one up in the Win column.
(Cover art by Gene Mollica, all rights with current holder).

Filed under Is Our Writers Learning?

6 responses to “Is Our Writers Learning? Libriomancer by Jim Hines (#SFWApro)”