As I wrote last year, producer Hal Wallis once defined a great movie as one with three good scenes and no bad ones. I think that’s applicable in print fiction too—three good elements, no bad ones or some such formula. And two things I read this week show how that plays out in practice.
GREEN ARROW: The Midas Touch by JT Krul, Keith Giffen and Dan Jurgens is the first volume of the DC reboot series of Green Arrow. It has no really bad scenes or elements, but it also has absolutely none that rise above “bland.” 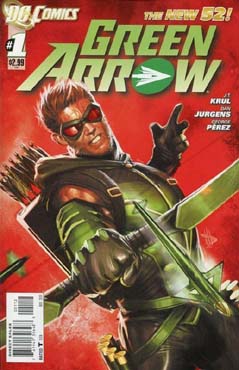 (Cover by Dan Jurgens and George Perez, rights with current holder)
As I’ve written before, GA was at his most distinctive as a radical leftist firebrand. Unfortunately, someone at DC apparently decided the definitive version of Green Arrow was when he was a Batman clone. As originally presented, GA was Batman with a bow-and-arrow: Millionaire playboy secret identity, Arrow Car, Arrow Plane, Arrow Cave, kid sidekick (lots and lots of characters were Batman clones in the Golden Age so it’s not that surprising). In the reboot universe he’s a millionaire philanthropist who fights crime on the side, just like Batman. Only duller: no tragic backstory (TV’s Arrow does that better), nor much personality. When one of his sidekicks quips that the murderous Blood Rose could easily be some woman he dumped, it doesn’t work because he hasn’t shown any sign of bad-boy behavior. Or any behavior. And none of the villains are any better. It’s easily the blandest book of the reboot.
By contrast, Mr. Penumbra’s 24-Hour Bookstore by Robin Sloan has lots of good bits, but one really bad one, a great steaming turd in the punchbowl. It’s why my review on Goodreads is one star instead of four.
The protagonist, Clay, is an unemployed web designer who lands a night-shift job in the title emporium. It’s a weird place that doubles as used-book store and lending library, with a gathering of eccentrics who borrow books all apparently written in gibberish. With the help of his friend/potential love-interest/Google employee Kat he begins trying to figure out what’s going on and discovers a secret society dedicated to learning an ancient secret hidden by the legendary medieval printer Manutius (an actual person).
The good elements include that Clay is engaging, the writing is light and entertaining and Sloan manages (with one exception) to drop just enough references to modern tech and brand names to keep the feeling the story’s taking place in the real world. The conspiracy is stock (and I’m not sure the lending library aspect makes any sense as part of it) but adequate. The idea that ancient mysteries aren’t so hard to crack with modern computer technology works well, though I agree with the NYT’s review that it’s so easy, there’s no real drive to the novel. Need to research something, anything? Google it and the answers appear on your laptop!
And that leads us to the bad thing which is Sloan’s constant fluffing of Google throughout the book. He can’t go five minutes without mentioning how awesome Google is. Which I could understand up to a point—if you’re researching online, Google is probably going to come up—but he crosses that point just a few chapters in, when he and Kat (a Google employee) have lunch in the Google cafeteria. And it’s AWESOME! Because Google feeds its people with AWESOME FOOD! And later Kat starts talking about a six-hour staff meeting she attended and it’s AWESOME! Even six-hour meetings are AWESOME when they’re a Google because the company’s that cool! And Google’s book-digitization project is AWESOME and let’s not even discuss any of the copyright controversies (Clay seems to find copyright infringement lawsuits inherently objectionable from one remark he makes. Maybe there’s a reason?). And the search engine’s AWESOMENESS is one reason everything flows so smoothly: What could a mere centuries old cabal do against the AWESOME power of Google.
One bad thing is all it takes to make me loathe a book.

4 responses to “Three good things, one bad one: Reprise (#SFWApro)”