As I’m a huge fan of Jeanine Basinger’s The World War II Combat Film, I had high hopes for her I DO AND I DON’T: A History of Marriage in the Movies. Basinger argues that while Hollywood in the sound era never advertised a “marriage” genre (portraying most movies about marriages as romance, drama, tragedy or crime films) it definitely existed. She defines the marriage story as Couple Has Marriage, Couple Loses Marriage, Couple Gets Marriage Back, with the loss in the middle caused by problems such as infidelity, class issues, lack of money, sudden riches (reassuring the audience being poor and happy was better) or murder. She also breaks down several tropes Hollywood used regularly such as Marrying Without Love, discovering We’re Not Legally Married, or tales of Wife on a Journey (to Canada, India or life on a farm) and how the war years and the departure of so many husbands for the military changed the genre. Unfortunately, this doesn’t work as well as the earlier book, partly because the boundaries are harder to define (Basinger doesn’t even observe her own definition) and more because she dismisses movies made after the studio system broke down at the end of the 1950s. Her rationale is that while later movies get to deal with sex and divorce more openly, they’re just old wine in new bottles, and that stories of marriage have really shifted to television (but even there, she barely touches on sitcoms post 1950s). This makes her coverage very weak (she might have done better to confine herself to the studio era): she says, for example, that The Story of Us establishes Marital Therapy as a new subgenre but Woody Allen was tackling that idea 20 years earlier. Not without interest, but much less than I expected.
AIR: A History of the Future by G. Willow Wilson and M.K. Perker wraps up Blythe’s story (I covered the previous volume here) as she trains to become a hyperpract pilot. First she goes to Russia to discover a lost Jules Verne manuscript, then she encounters the author of The Little Prince and finally the Etesian terrorists who’ve been hunting her for so long make their final, do-or-die attempt. This was good, but feels underdeveloped, which probably reflects the series getting canceled earlier than expected.
(Cover by MK Perker, all rights with current holder) 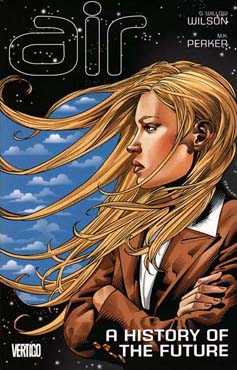