Redemption is a powerful source for story material. The fallen hero who tries to stop her fall, the villain attempting to rise, the tyrant or fiend who sees the light. It’s also damn tricky.
Redemption actually involves several inter-related things: Can you earn forgiveness from someone you’ve wronged? Can you prove to society that you deserve to be forgiven? And can you truly become a better human being?
Case in point: It’s a tenet of Christianity (subject to multiple interpretations and sectarian disputes of course) that if you sincerely repent your sins and turn to Jesus, you’re saved. Which is unsettling: It’s nice to know I can’t do anything so horrible God won’t take me back, but if someone murdered my family, I’d probably hate the thought the killer can get into Heaven.
Salvation in this case doesn’t have anything to do with secular, society forgiveness. Being saved doesn’t and shouldn’t get you out of prison, or community service or whatever it is that you’ve done. God’s justice and our are separate things (even if we all agreed on what God’s justice was, or if it exists)
This leads us to Return of the Jedi. Orson Scott Card was quite PO’d that merely by saving Luke, Darth Veder gets to join Obiwan on the light side of the force. And Card has a point, particularly after seeing Anakin’s massive bloodshed in Ep3. On the other hand, if Vader had repented and turned to Jesus, Card would presumably have to concede that he gets a free pass (or doesn’t that hold in the LDS?). 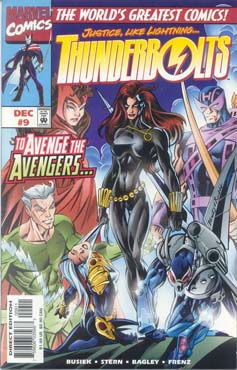 My point is that for a redemption arc to work as drama, it can’t be too easy. Even in a Christian context, you need someone to seriously face up to the fact they’ve been a complete shit before they make the change. And then they have to prove it. Dramatically speaking, we need works as well as faith.
In a non-religious context, we have Thunderbolts #9 as an example (cover by Mark Bagley, all rights to current holder) Kurt Busiek looks back at the second Avengers team, which included former “evil mutants” Quicksilver and the Scarlet Witch and ex-criminal Hawkeye. In the original stories, their transition to heroes was smooth; here Busiek shows the public much less willing to let them off the hook. Mark Waid’s Incorruptible series (covered in some of my book review posts) does a good job by taking Max Damage’s past crimes seriously: He has lots to atone for, and Waid doesn’t make it easy.
Long-running series pose their own problems. In comics, as several creators have said, redemption comes about simply because some characters have been around for years and in trying to find new angles, it’s natural to start seeing things from their sides. This can create an interesting development (Magneto’s off-and-on stints as hero, Catwoman’s moving from villain to anti-hero). But it’s to let past crimes slide (one Marvel editor suppposedly vetoed a Venom series on the grounds he was just too murderous).
In TV, charming, attractive actors can make it easy to see characters as more sympathetic than they are. Syler, the murderous power-stealer of Heroes‘ first season became implausibly sympathetic as the series went on; I can’t but suspect some of that was because pre-Spock Zachary Quinto had a female fan base.
Regina in Once Upon a Time frequently comes off as tragic. She’s lonely and desperate for love and Lana Parilla conveys her pain very well. That doesn’t change the fact she was a coldblooded killer who devastated a kingdom from her hatred for Snow White and near the end of this past season was willing to kill the entire cast provided she and her son could escape. She starts out the year trying to be good but when it turns out people still don’t trust her, she turns—and I can’t help feeling the show wants us to sympathize with her more than she deserves (after all she’s done, assuming she’s still a killer is hardly unreasonable).
Likewise, Vader’s turn to the light worked for me because it’s such a powerful dramatic moment. It might be a lot harder to buy if I’d read it on the printed page.

One response to “Redemption”