Aliens coming for our women .. our dead … and Santa!

WHAT PLANET ARE YOU FROM? (2000) has Gary Shandling sent to Earth to impregnate an Earth woman as Phase One in their plan of conquest (one of the movie’s flaws is that they never explain how that was going to work). Despite their world having given up on emotions and sex, Shandling’s confident his training in seduction will make it easy to seduce a woman; after repeated failures he succeeds with Annette Bening only to discover that Feelings Are Good and Earth’s Way Is Better (“Why do we want to make them like us?”). This has some funny lines (“You made love to me while we ate — if I’d known you were going to do that, I’d never have ordered the soup.”) but not quite enough to make it work, alas. With Camryn Mannheim as one of Benning’s friends, Linda Fiorentino as an adulteress, John Goodman as an FAA investigator turned UFOlogist (“After 22 years I’ve finally seen something I can’t explain away.”) and Ben Kingsley as the aliens’ supreme leader. “We transfer all our dysfunction onto our kids and I don’t want to be responsible for that — I’ve already fucked up my dog.”

FRANKENSTEIN MEETS THE SPACE MONSTER (1965) is every bit as bad as I’d heard, starting with the lack of any Frankenstein connection; the astronaut for a new space launch is an android named “Frank” and when he’s shot down by aliens he ends up running amok in Puerto Rico like a — Frankenstein! Meanwhile aliens whose women have all been wiped out in war show up Puerto Rico to take ours so we get lots of screaming and kidnapping before Frank puts a stop to that. “I’m not afraid — fear is either the result of physiology or superstition and ignorance.”

I’ve watched Ed Wood’s classically awful PLAN NINE FROM OUTER SPACE (1959) so many times it’s almost impossible to look at with fresh eyes. However one thing did jump out at me, that it proposes a massive government cover-up of UFOs, bigger by far than Invasion of the Saucer Men: the aliens actually destroyed an American town (“It was a small town, I admit, but nevertheless it was a town of people!”) and the government blamed it on natural disaster (“You hear an account of a fire, an earthquake, a natural disaster, and you wonder.”). That explains why the desperate aliens are launching Plan Nine, resurrecting the dead to stage a March on Washington that cannot be ignored. Memorably and hilariously awful. “He’s dead — murdered — and somebody’s responsible!” 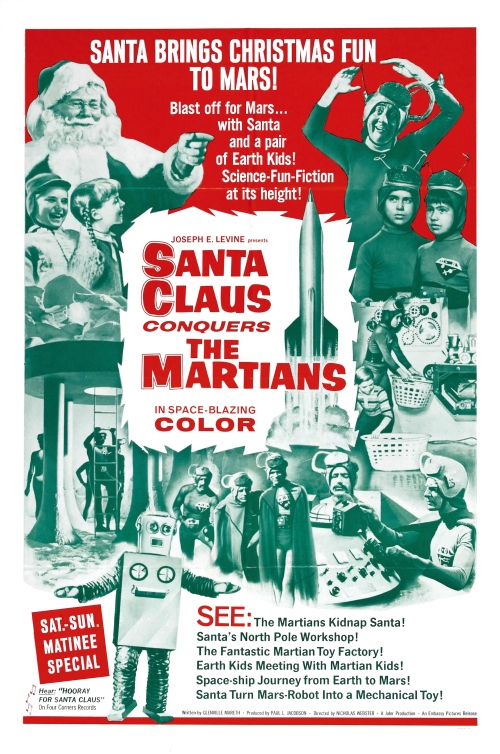 SANTA CLAUS CONQUERS THE MARTIANS (1964) is also bad, but not as entertaining. It’s another example of old-school abduction by aliens, (i.e., without anal probes) as Martians kidnap that jolly old elf to pump some life back into their own kids (“Mars doesn’t have children — they have children’s bodies but adult minds!”). This is also an example of alien attack uniting the world as everyone puts aside their differences to save Santa (“Never in the history of mankind have the world’s nations reacted with such unanimity and cooperation.”). I feel safe in saying this will never become one of my Christmas perennials. “Earth has had Santa Claus long enough — we shall bring him to Mars!”

I COME IN PEACE (1990) is another bad film, with cop Dolph Lundgren discovering a series of bizarre murders are the work of an alien drug dealer extracting human endorphins because they’re a super-drug on his planet. Mindless gory action and the alien’s “I come in peace” (the only thing he says in English) never works as a catchphrase. “When you had me wondering if you were dead or alive, I was kind of rooting for dead.”

THE HIDDEN (1987) has cop Michael Nouri wondering why perfectly respectable people suddenly turn into psycho outlaws, while also putting up with oddball FBI agent Kyle MacLachlan horning in on the investigation instead of Nouri’s regular partner Clu Gallagher.The truth is that the outlaws are a succession of bodies an alien parasite is using an discarding; MacLachlan is an alien cop borrowing a human body to track the killer down. MacLachlan’s flattening of affect doesn’t express his alienness well (it comes as much poor acting as a choice) but the villain’s gleeful malevolence makes this more entertaining than I Come in Peace. “So you’re saying we’ve got spacemen?”