The moment I saw the opening of The Crimson Pirate (1952) I knew it was going to be different. 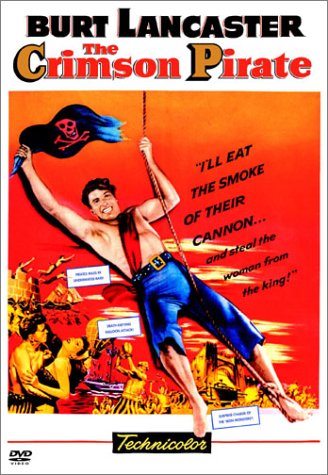 A shirtless Burt Lancaster swings on a rope from one mast of his galleon to the other. Grinning, he warns us that on a pirate ship in pirate waters, we should believe only what we see. Swinging back to the other mast, he pauses and corrects himself: “No. Believe half of what you see.”

Lancaster plays Captain Vallo, a Caribbean pirate as cunning as he is acrobatic (Lancaster was a circus acrobat before his movie career). In the opening, Baron Gruda (Leslie Bradley), a Spanish emissary, spots a vessel adrift, its crew killed by scurvy. When he sends some men aboard to investigate, the not-so-dead crew clobber them, then capture Gruda’s ship.

With the Caribbean rife with rebellion against Spain, the ship’s hold is packed with muskets, shot and gunpowder for the colonial military. Vallo realizes the rebels would pay handsomely for that kind of armament, a thought that horrifies First Mate Bellows (Torin Thatcher). He protests futilely that gun-running’s not piracy, it’s … business!

The rest of the crew, however, is thrilled with thoughts of splitting the 50,000 florins Vallo says the guns are worth. They’re even more thrilled when Gruda and Vallo strike a deal. Vallo will sell guns to the Cobra Island revolutionary leader El Libre, then lure the rebels into Gruda’s hands for another 100,000 florins.

On Cobra, Vallo, accompanied by his sidekick Ojo (Nick Cravat, Lancaster’s former partner on the trapeze), hunts for El Libre, runs rings around Spanish troops — okay, technically he and Ojo jump, bounce and tumble their way around them — and meets El Libre’s daughter, Consuela (Eva Bartok). They’re mutually attracted but she’s a freedom fighter and he’s a ruthless cynic (“All my life, I’ve watched injustice and dishonesty fly the flag of decency — I don’t trust it.”). 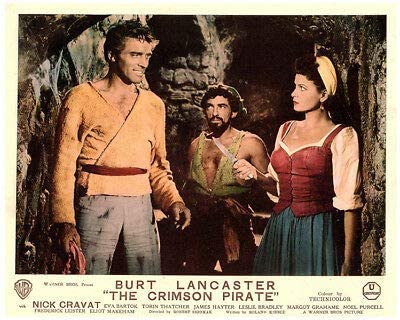 I don’t think I’m spoiling anything to say Vallo finally does the right thing, Gruda does not crush the rebellion and Consuela/Vallo shippers will end up happy. The ending of any swashbuckler is predictable; it’s the journey there that makes it fun. Lancaster and Cravat’s delightful acrobatics. Cravat clowning silently like a second-string Harpo Marx (staying mute concealed his thick East Coast accent).  Thatcher’s Bellows, constantly reminding everyone how movie pirates are supposed to behave. Though I could have done without his grumbling when Vallo rules out assaulting Consuela (“We don’t leave a pretty woman molested aboard ship — it would give piracy a bad name.”).

On the down side, Eva Bartok isn’t strong enough as the fiery islander (she was actually Hungarian) to match Lancaster’s screen presence. Bradley’s Gruda is disappointingly bland. I’m sure a lot of colonial officials were bland functionaries but that’s no reason to make one the villain in a pirate swashbuckler. Neither one is so bad as to ruin the film though.

In some ways, the end of the film isn’t at all predictable. For one thing we have the scientist Elihu Prudence (James Hayter) who turns the climactic final battle against Gruda into a steampunk extravaganza. After intense days and nights of work he creates a balloon, duplicates the formula for nitroglycerin and comes up with some prototype wooden tanks (cannon with a movable wall around them). The Spanish are utterly terrified when Ojo drops bombs on them from the air.

Then there’s the politics. As Jeffrey Richards says in his excellent Swordsmen of the Screen, most swashbuckler movies are pro-monarchy. Sure, they overthrow a lot of tyrants, but only to set the rightful king on the throne again. Once Robin restores Richard the Lionhearted on England’s throne, it’s a given that peace and justice will reign again. Zorro doesn’t fight California’s corrupt government to claim independence but to put a just governor in charge.

The Crimson Pirate ain’t having none of that. Cobra’s people want independence, nothing less. The movie ends with the island free; with Vallo and Prudence on their side, we can be sure they’ll stay that way. That’s almost as remarkable as the steampunk.