So on Twitter last month, one Oliver Darkshire complained that in modern superhero stories “the ‘villain’ starts looking so reasonable in comparison to the unfettered capitalist nationalism of our status quo that the writers have to shoehorn in a dissonant violent episode in case the audience changes sides.” The villain’s out to feed the hungry or prevent global warming, which makes their goals sympathetic — oops, they just committed cold-blooded murder, so much for that!

The Mary Sue argues this is the case with Falcon and the Winter Soldier (which I haven’t seen). After Thanos erased half the world’s population, the nations pulled together; now that everyone’s returned, the world’s falling into its old patterns. The Flag-Smashers (which is a dumb name, even though it’s taken from the comics — who the hell smashes flags?) want to unite the world with open borders, which sounds nice — but then it turns out they’re terrorists willing to commit murder in their cause.

This is a shtick that goes back a long way. The 1935 film Fighting Youth makes familiar criticisms of college football — it’s profitable for colleges, but not for players, who are at risk for serious injury — but puts them into the mouth of communists (if they can turn college kids against football, they can get them to do anything!). 1951’s I 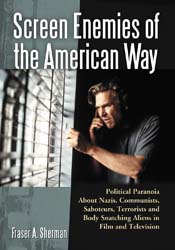 Was a Communist for the FBI shows the civil rights movement consists of black sheeple manipulated by the Reds to tear America apart (I watched both movies for Screen Enemies of the American Way).

Environmentalists get this a lot. R’as al Ghul debuted in the Bronze Age, he was head of the League of Assassins — but he’s also a radical eco-warrior who believes trimming the world’s population by half (hello, Thanos!) will make it more environmentally friendly. Samuel L. Jackson is the murderous villain in Kingsman who justifies his actions by the need to stop global warming. The Seventh Plague by James Rollins also has a villain whose reckless experiments to stop global warming lead to catastrophe.

Then there’s Stargirl on the CW. In the climax, we learn villainous Icicle is honoring his late wife’s wishes by using mind-control to take over several states and force them to embrace green technology, cutting carbon emissions and a living wage; a stunned Dr.

Midnite asks if fighting him is the right thing to do (there’s no explanation for why the rest of the Injustice Society would be into this humanitarian effort).

In the case of I Was a Communist for the FBI the goal is clearly to discredit racial integration, just as in the real world segregationists blamed it on communist agitators (left to themselves, black America would be perfectly happy with Jim Crow). In the case of more recent stories I’m not sure.

Is it to humanize the villain? R’as, for example, may lead an assassin cult, but his goals give him a certain nobility. The antagonist in Seventh Plague is clearly well-meaning, as are other mad scientists who let their desire to help humanity outweigh trivialities like the well-being and consent of their guinea pigs.  Then again, Jackson in Kingsman is a thoroughgoing villain; it’s hard to see him as sympathetic. So was the idea to play into the stereotype that environmentalists are eco-freaks who’d shut down civilization to save a tree frog? In Stargirl it feels like a hamfisted attempt to create a conflict or throw in a twist that never gets explored.

Of course it’s true that lots of dedicated reformers do go to extremes and commit terrorism. But I rarely get the feeling that’s the story these stories are telling; it’s closer to “people with a cause are dangerous!” unless it’s the heroes’ cause. One indicator is whether we get a good character expressing the same arguments. Anti-communist films, for instance, show Reds infiltrating labor unions but they’re usually clear their are good labor leaders (who negotiate with employers and never strike). Not one of these films ever shows a good civil rights leader. Then again, we have films like 1998’s Siege which overwhelmingly paints Muslims as terrorists despite token Good Muslim Tony Shalhoub.

I don’t really have a conclusion to draw, but I think “villain with sympathetic politics who makes his beliefs look bad” is definitely a thing.

One response to “Well-meaning villains: our good became their evil”