JENNINGS AND DARBISHIRE by Anthony Buckeridge wraps up that omnibus volume TYG bought me, as Jennings and Darby’s efforts to launch a Form Three newspaper leads to stuffing a parcel of fish up the chimney, wandering on the Sussex moors in the dead of night, trying to master algebra, eating way too many donuts and learning the dark secrets of Mr. Wilkins’ past. While I don’t feel the urge to seek out any more of the series just now, this was a fun one to wrap up with.

EVIL GENIUS by Catherine Jinks is a bizarrely engaging twist on that popular figure of Y/A and younger fiction, the Precocious Kid Too Smart To Fit In. The perpetually frustrated, outcast Cadel discovers he inherited his brains from his supervillain father, who then enrolls Cadel at the equivalent of Evil Hogwarts to train him into a master criminal. This is a lot of fun, though it runs out of steam at the end — the action packed climax doesn’t fit the rest of the book, and Cadel spends much of it acted upon rather than acting. 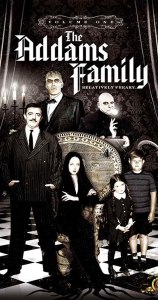 I read WELCOME TO THE DREAMHOUSE: Popular Media and the Postwar Suburbs by Lynn Spigel primarily because her chapter on paranormal sitcoms such as Mork and Mindy is relevant to Alien Visitors. Spigel’s thesis, which my friend Ross had told me about, is that the sitcoms subvert the cliches about suburban life much the way an ethnic family might have done in the 1950s — The Addams Family, for example, shows that while the Addams are unfailingly friendly and helpful to the neighbors, their utter nonconformity makes them outcasts.

Despite Spigel’s academic writing style, the rest of the book proved interesting too. Spigel discusses how TV was initially presented as a way to stay home with the family while seeing the world, the influence on family dynamics, the use of sitcom images as a version of historical reality, and The Truman Show‘s take on suburban domesticity as a trap.