The Claws of the Cat, the Tail of the Tigra 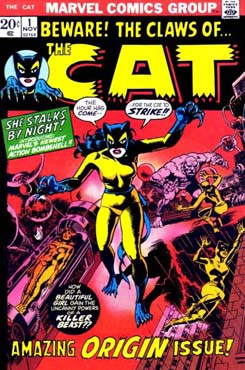 It starts with The Claws of the Cat #1, a 1972 attempt at a feminist superhero. Greer Grant was a bright young college student who fell in love with cop Bill Nelson, married him and put her education and any career plans on hold to be Mrs. Bill Nelson; that’s what her husband wanted, after all (this was a familiar scenario for women in those days). When Bill died of a gunshot, Greer had no skills to support herself but eventually wound up working with Dr. Tumulo, a scientist researching on ways to enhance human ability. Despite the interference from her financial backer, Donalbain — he wanted his bimbo mistress to undergo the treatment — Tumulo put Greer through it as well, endowing her with greater speed, strength, intellect and an empathic ability. When it turned out Donalbain had some very bad ideas for the treatment, Greer donned the costume he’d designed for his mistress (she died due to her lack of training) and ended his plans as (drumroll) the Cat!

It was a good story followed by three much less engaging issues with C-lister foes (Commander Kraken and Man-Bull, for instance) and one team-up with Spider-Man in Marvel Team-Up. That might have been it but Tony Isabella began writing for Marvel a couple of years later and wanted to add more women to the lineup. He hit on the idea of transforming Greer into a literal cat — Tigra the Were-Woman (“were” in “werewolf” actually means man so this name meant “Tigra the Manwoman.” Oopos)! It turns out Dr. Tumulo was part of an ancient race of Cat People. When Greer is fatally injured by Hydra agents hunting the doctor, the Cat People put Greer through a mystic ritual transforming her into one of their own, whom they named Tigra after a legendary warrior of their people (Steve Englehart would later retcon a lot of this. It got confusing).

After defeating Hydra, Tigra had a brief run in Marvel Chillers and popped up in several guest-star bits. The Chillers run by Isabella was good, pitting her 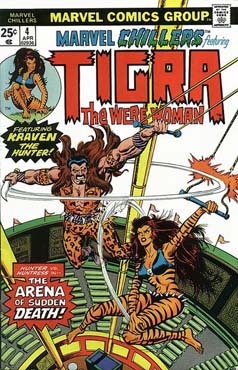 against a team of Scavengers called the Rat Pack, Spidey’s old foe Kraven and pairing her up with Marvel’s Native American hero, Red Wolf. The team-ups are variable in quality.

I was puzzled why Marvel included a 2002 Tigra miniseries with all the Bronze Age stuff, but it turns out the four issues go back to the Were-Woman’s roots. She discovers Bill may have been murdered by vigilante cops, members of a secret society that’s into gunning down crooks without inconveniences like a trial. Going undercover as a rookie (at this point she could shift back and forth from her Tigra identity) she tries to root out the truth. If the plot is unclear in spots, it’s overall good, though the assurances the vigilantes are totally not like most cops rings a little hollow in the days of Black Lives Matter.

Overall this volume was nothing I needed to have, but I’m happy that I do have it.