The book Alien Invasions lists ALGOL, THE TRAGEDY OF POWER (1920) as one of the first alien-invader movies: a traveler from the Algol star-system gives a miner (Emil Janning) the secret of generating infinite electrical power. This liberates him and his fellows from the mines and makes him wealthy, but the worldwide demand for increasing amounts of power soon has people slaving away in factories to afford it, little better than miners. Unfortunately this vision of brutal capitalism pales compared to Fritz Lang’s Metropolis and I’m not sure this even qualifies for Alien Visitors: the alleged alien could just as easily be some kind of evil spirit. “The devil — yes, that’s what I’ll be from now on.”

Saturday Night Live has spunoff countless skits into movies, many of them flops, which is why I passed on CONEHEADS (1993) when it hit the theaters. Catching it for Alien Visitors it turned out to be surprisingly good. Pointy-headed aliens Dan Ackroyd and Jane Curtin arrive on Earth in the early 1970s to scout it out for conquest, but after their ship crashes they’re forced to adapt to Earthly life as best they can. Complicating things are malevolent xenophobes David Spade and Michael McKean who want these illegal immigrants gone (this would double bill well with the 1990s film Here Comes the Munsters, which had a similar pro-immigration theme). Very enjoyable with a strong cast including Chris Farley, Phil Hartman, Laraine Newman, Drew Carrey, Adam Sandler, Jason Alexander, Jan Hooks and Michael Richard; part of the fun is that they’re more obviously ETs than Robin Williams’ Mork from Ork, but everyone treats them as pretty much normal.  “I read in a magazine that you can talk to me about anything.”

Kids on a family vacation discover pint-sized ALIENS IN THE ATTIC (2009) and have to thwart their plan to recover an ET McGuffin from the basement, then summon their space fleet to conquer us. And as the aliens have mind-control weapons that work on adults, but not kids, clearly the siblings and cousins will have to do it their own. Standard kidvid adventure; like Coneheads this relies on one alien bluffing his people into calling off the invasion to save the world. “They were arguing and fighting — then their lips hugged!”

Following on The Asylum’s War of the Worlds came the 2008 sequel WAR OF THE WORLDS 2: The Next Wave, in which C. Thomas Howell as George Herbert learns an alien mother ship has popped out of a wormhole (“That’s why we didn’t see them coming.”) and gets abducted as one of the guinea pigs the ETs are using to find a cure for their vulnerability to Earth bacteria. This looks cheaper than the first film (CGI space walkers rather than the insectoid alien tanks, and lots of scenes set in small rooms) and curiously establishes the invaders are indeed Martians. Even more curiously this throws in a time-travel element that doesn’t seem to affect the plot at all.   “It’s a tachyon cloud and it’s spreading — it’s a time hole!” 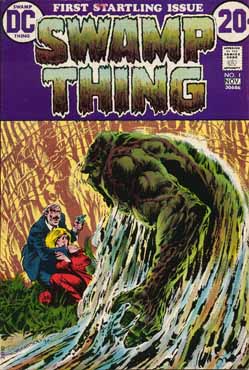 SWAMP THING (2019) was a TV series that just managed to complete its run on DC’s streaming service before that shut its doors. It’s now streaming on the CW, but regrettably that network is not going to pick it up. The story has CDC doctor Abigal Arcane (Crystal Reed) returning to her hometown of Marais, Louisiana, to fight a mysterious plant-based pathogen. There she meets maverick scientist Alec Holland, who’s convinced the disease is tied in to local power player Avery Sunderland (Will Patton), but bis attempts to prove it transform him into — well, three guesses, not that you’ll need them.

This was well done with a good cast (including Ian Ziering as the Blue Devil and Virginia Madsen as Sunderland’s long-suffering wife) and a lot of DC characters and references including the Phantom Stranger, Madam Xanadu, the Floronic Man and the Rot. Obviously they hoped for big things to come; even though they didn’t get them, the Easter Eggs add to the fun. “The swamp wants me to kill you — but I can’t bring myself to do that.”

#SFWApro. Cover by Bernie Wrightson, all rights to image remain with current holder.

4 responses to “Alien visitors in movies, plus Swamp Thing!”