A pretentious mess, a cheap crook and a swashbuckler: this week’s viewing.

When a movie isn’t available on Netflix, I’ll often put it in my Amazon wish list. That’s led to me acquiring Girl on the Bridge and Corrupted Hands, but this year I wound up with POSSESSION 91981), a muddy pretentious mess of a movie. With Isabella Adjani and Sam Neill’s (he looks uncomfortable with his role every second of the film) marriage falling apart, we get loud shouting matches, subway orgasms, gratuitous violence and Adjani having sex with a Lovecraftian horror (I’m sure this Means Something but I don’t care what). Despite great critical reviews, this was a waste of time; I’d suggest double-billing with Polanski’s Repulsion for another deranged female protagonist.“There is nothing in common among women except menstruation.”

THE UNDERNEATH (1995) was Stephen Soderbergh’s remake of the noir film Criss Cross, though this version is too low-key to really feel noir to me. Peter Gallagher plays a perpetual screw-up whose return to his home town gets him in trouble with his bitter brother, his ex and his ex’s mobbed-up boyfriend. Fortunately Gallagher’s landed a job as an armored-car guard so with him as the inside man he can settle up with the boyfriend, then leave with his ex and live comfortable — what could go wrong? A good character study, though I’m not sure what the ending reveal means; Joe Don Baker plays a business owner,, Elisabeth Shue is a bank teller. “I find myself looking to the outer edges of acceptable behavior to make myself feel better. 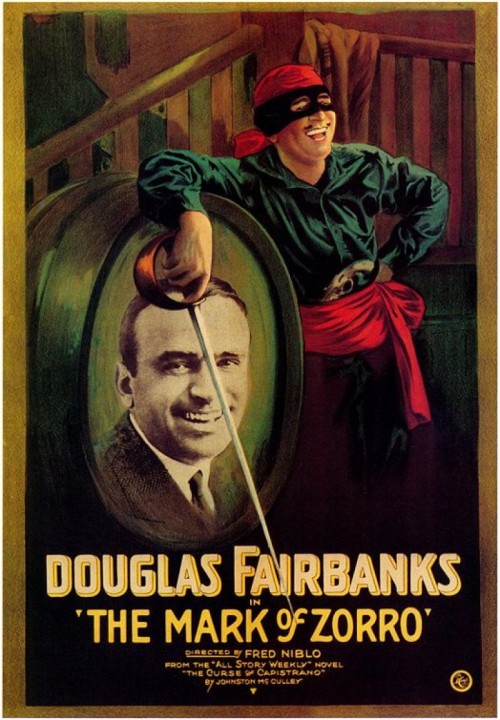 My friend Ross’s present to me this year was THE MARK OF ZORRO (1920), Douglas Fairbanks’ first swashbuckler. As the listless, effete Don Diego and the daring outlaw hero of Spanish California, Fairbanks is a wonder, a living special effect tossing off acrobatic feats effortlessly. As I’ve mentioned before, old-school swashbucklers tend to be monarchical and this is no exception: Zorro defends the poor but when it’s time for revolution he rallies the aristocratic caballeros; his goal isn’t independence for California but a just governor. Fairbanks is also much less Robin Hood than some versions of Zorro — he beats up soldiers for mistreating the natives and the peasants, but he isn’t robbing the rich to give to the poor. None of which affects my fondness for this delightful film. “Have you seen this one?”

One response to “A pretentious mess, a cheap crook and a swashbuckler: this week’s viewing.”