I wish I’d read HIDDEN FIGURES: The American Dream and the Untold Story of the Black Women Mathematicians Who Helped Win the Space Race by Margot Lee Shetterly before the movie made the basic concept — that a number of black women “computers” (originally a term for human number-crunchers) helped plot the necessary math for the space program — familiar to me. That said the details are quite interesting, going back to WW II and the military’s need for computers to help figure out the complexities of air flow and pressure in aeronautical engineering. Black women with math skills had no future outside teaching, so they seized the opportunity as a better-paid, more challenging alternative. When Sputnik made the space race a priority, many of the women jumped to NASA (I’d never realized how much precise calculation is involved in sending a capsule into orbit and landing it in the right spot in the ocean), culminating in math whiz Katherine Johnson helping review the computer calculations for Apollo 11. This an interesting slice of history, including the always amusing tech details of ancient computer tech (high-speed data transmission of 1 kilobyte a second!) though it’s not exactly dramatic: the women did grapple with sexism and racism but they didn’t have the kind of turning points that make for a character arc (that is not the book’s fault, of course). 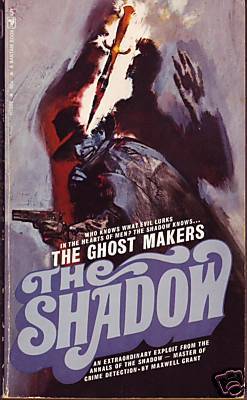 In the opening of Walter Gibson’s THE GHOST MAKERS a seance for wealthy patrons goes wrong when someone ends up stabbed; Det. Cardona suspects the killer was anything but a spirit, but which of the attendees did it? Fortunately the Shadow is on the case, which turns out to involve a network of phony mediums pooling their resources to pull off bigger scams, like having multiple suckers invest in the same crap stock. A couple of years after Gangdom’s Doom assured us the Shadow doesn’t kill and he’s still not as murderous as I envision him, frequently shooting guns out of hands rather than killing crooks. This is a solid series entry; there’s at least one more ghost-busting tale in the series, House of Ghosts.

While Scott and Amundsen taught me scurvy was an ugly disease, I had no idea until reading SCURVY: How a Surgeon, a Mariner and a Gentleman Solved the Greatest Medical Mystery of the Age of Sail, by Stephen R. Bown how nightmarish it was. Because the loss of vitamin C affected collagen, for instance, broken bones that had previous healed would suddenly un-knit in serious scurvy cases. This had disastrous effects on the British navy in an age when shipboard conditions could weaken even strong, healthy men but the admiralty stubbornly resisted treating seamen as anything but cannon fodder; the medical profession’s antiquated view of how disease worked made it next to impossible to think coherently about the problem. Ship’s surgeon James Lind and Captain Cook saw the light but couldn’t dent official dogma, so it was left to physician Gilbert Blane, who had not only good research but good social connections, to win the fight. A good medical history.

I presume the protagonists of Edward Eager’s MAGIC OR NOT mentioning Half Magic as a favorite book of theirs is meant to signal the new story is not in that continuity. In contrast to the blatant magic of the first four books, here the wishing well they’re using to help people is so subtle they wind up wondering if it was their imagination. Probably not (as they point out that would take every adult in town being in on fooling them), but this remains a fairly ordinary children’s adventure, not up to the earlier tales.

#SFWApro. All rights to cover image remain with current holder.

One response to “Math, mediums, scurvy and kids: books read.”