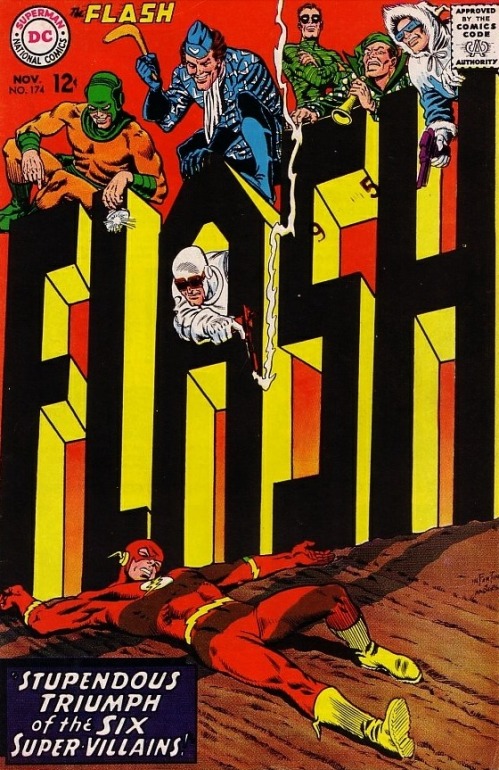 THE FLASH: The Silver Age Omnibus Vol. 3 comes with a variety of creators (John Broome, Carmine Infantino, Ross Andru, Robert Kanigher, Frank Robbins) which underlies what a transitional era the late 1960s were at DC. Marvel was kicking their butts in sales (though the interest in Batman from the TV show made up for some of that), veteran Flash artist Infantino got promoted to publisher and many of the company’s creators were fired after asking for a better financial deal.

Thus the first year or so is standard Silver Age Flash (I consider this a plush). Then we get Ross Andru and inker Mike Esposito replacing Infantino and they don’t work at all. Frank Robbins, a veteran comic-strip writer/artist and later a great Batman writer, became the new writer for a while and he just didn’t click at all. John Broome provides a few more stories and Cary Bates (who wrote Flash in the Bronze Age) contributes one landmark story (it established we live on another world in the DC multiverse) but this is overall weaker than Volume 2 (I’m currently working through V.1)

THE SPIRIT ARCHIVES Vol. 6 is also disappointing: not horrible but these stories came out when Spirit creator Will Eisner was in the Army so they were all ghosted. Admittedly when your ghosts include Manly Wade Wellman and Golden Age artist Lou Fine, that’s pretty impressive, but they aren’t up to Eisner’s average. And a couple of yarns where the Spirit uses his sidekick Ebony as a glorified gofer are really uncomfortable to read.

THE SILENT SEVEN was the sequel to the Shadow novel The Death Tower, which revealed the villainous Dr. Palermo was one member of this mysterious crime cartel (they apparently replaced Palermo between books as they’re at full strength here). Gibson has an ingenious plot here: rather than a straight Shadow vs. Seven fight, he has a schemer replace one of the members to enlist their resources in his own crime plans. It’s fun, but the Silent Seven never seem as formidable as Palermo in the previous story.

I felt oddly nostalgic reading THE PLAYBOY BOOK OF SCIENCE FICTION as it brought back the days when Playboy not only existed, it was a honking big deal, and not just for the playmates; for all the jokes about “I read it for the articles” I have female friends who did just that. Hugh Hefner knew sex + sophistication would sell better than sex alone and he paid for quality. Thus we have stories by Ray Bradbury, Harlan Ellison, Kurt Vonnegutt, Doris Lessing and some non-genre names such as Donald Westlake and Billy Crystal. A good collection though like most anthologies it has some stories I didn’t care for (Doris Lessing’s bored me) and some that are just bad (Vonnegut’s Welcome to the Monkey House has the protagonist raping drugged-out future women to make them see Sex Is Wonderful!)

ALL THE KING’S MEN by Robert Penn Warren is one of TYG’s favorite novels, and I can see why. Narrator Jack Burden is a former historian, former reporter, now

right-hand man to Willie Stark,, governor of an unnamed Southern state (Warren resisted the assumption Willie was modeled on Louisiana politician Huey Long). The noirish tale bounces through Jack’s and Willie’s past and future, showing how both men’s idealism has drained away in politics, though Stark is no worse than the people he’s up against and in some ways better (he taxes corporations who don’t want to be taxed) — but only some. As the power struggles come back closer to Jack’s own life, he has to figure out what the hell he’s going to do.

This is more a dark character study than a political drama and it’s strikingly written:

“It was the kind of apartment house where the bulb burns out and nobody ever puts a new one in and there is always a kiddie car left on a landing and the carpet is worn to ribbons and the air smells dankly of dogs, diapers, cabbage, old women, burnt grease and the eternal fate of man.”

And switching to something more fun and much less serious or literary, over at Atomic Junkshop I blogged this week about how I love Scooby-Doo Team-Up.

#SFWApro. Flash cover by Carmine Infantino, the other by Paul Gamarello. All rights remain with current holders.