Have you ever thought about becoming an intracranial bleeder for fun and profit?

So about a year ago I did a video for Medscape as The Man With Low Testosterone (they’re training videos for doctors to learn how to handle various situations with patients). Today I did another one, as Herman, a man with horrible headaches (caused, I believe by intracranial bleeding, though Herman doesn’t know that) who doesn’t want to go to the E/R. We did this by Zoom so I spent a lot of time yesterday finding a spot in the house where I could film myself against a white wall. Eventually I settled on putting a step ladder in the downstairs bathroom doorway and putting my computer on top of it.

The taping went quite quickly (they were very pleased) and their direction was good; the biggest problem was that I woke up this morning with a slight headache and couldn’t get the idea I had intracranial bleeding out of my mind. That aside I feel as pleased as — well, a young comic book intern!

Going over the script before the filming took up more time than expected but the pay is good, so I’m not complaining. Besides that, let’s see …

I got some more Leaf articles done. Last time I was working on them it was early in the pandemic and I found it a real slog. Apparently I’ve adjusted because this batch went down smooth.

I worked on rethinking both The Impossible Takes a Little Longer and Oh The Places You’ll Go! rather than just rewriting and pantsing yet another draft. Don’t get me wrong, the only way I can do early drafts is by winging it, but these have reached the point I need a thorough plot first. Both went well, though not as far along as I wanted.

I continued editing my hard copy of Questionable Minds and I finished the latest draft of Undead Sexist Cliches. Next week I start correcting in hard copy. Reading marketing material I learned I should have started on marketing about three months ago — but if I’d done that in advance I’d have finished the pre-book marketing and wouldn’t have the work ready. So hopefully this’ll work out.

And I posted on Atomic Junkshop about the Justice League’s first story and their use of snail mail as a way to find cases to work on.

I sent out two stories, one of which came back almost immediately. It will, of course, go out again, but it would be nice to get a sale from something besides Leaf. Leaf pays better than most fiction markets I submit to, and I’m pleased with the quality of my work, but getting fiction published is a lot more personal.

I’ll close with a shot of Wisp sleeping on the carpet from the previous week. I had to work so when I got up I hoped she’d join me on the couch but this is good too. If we do bring her inside on a regular basis we won’t be able to pet her all the time so having her relax on her own is good. 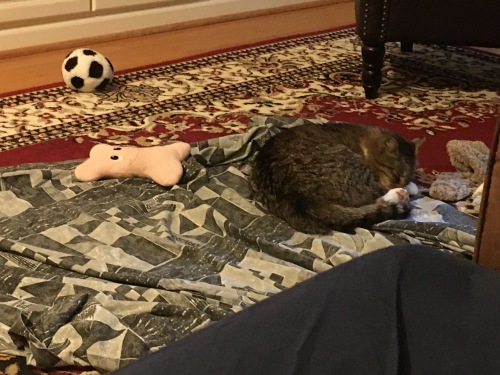 #SFWApro. Photo is mine; covers are by Dick Giordano (top) and Murphy Anderson and all rights remain with current holder.