Swords and sorcery but without enough magic? Some DC comics

So a while back I wrote about DC’s Bronze Age sword and sorcery series, Beowulf and Claw the Unconquered. The three characters I’m looking at in this post weren’t anywhere near as successful (and it’s not like Claw or Beowulf were breakout characters) so I’ll deal with them in one post.

Nightmaster didn’t even make it to series status, earning just three tryout issues in Showcase. Jim Rook is a musician who gets transported to the otherworld of Myrra along with his girlfriend. He learns he’s the son of Myrra’s great hero, the Nightmaster, and takes up Dad’s Sword of Night to fight the evil warlocks threatening the realm.

I was intrigued when I saw this in ads but it came out as my family moved to the U.S. from England so I only ever read the third issue, some years after it had come out. It was … okay. Given that it’s written by Denny O’Neil and I’m not a fan of his, “Okay” is better than I expected, but I remember it more for the Berni Wrightson art (taking over for Jerry Grandenetti ,who drew the first issue) than the story.

Like Stalker and Claw, Nightmaster did get an afterlife, becoming the leader of the Shadowpact magical superhero team many years later. He’s popped up off an on but I think it’s more DC’s refusal to give up on any Silver Age character, much as they keep reviving Hawk and Dove.

Denny O’Neil struck again with Sword of Sorcery, this time adapting Fritz Leiber’s Fafhrd and the Grey Mouser to comic book form. This began with them appearing in an issue of Wonder Woman —

After which they launched their own book. Art was by Howard Chaykin before he became a big name and I wouldn’t have anticipated that based on the five issues this lasted. While Chaykin later apologized for getting a lot of the visuals wrong (he would go on to work on another adaptation of Leiber’s heroes many years later) it’s not bad art, and O’Neil tells decent stories. I think the biggest problem is that where Marvel’s Conan the Barbarian gives us a sense of Conan’s life — it starts when he’s young and just leaving Cimmeria and goes on from there — there’s no sense of continuity in Sword of Sorcery, just one seemingly random adventure after another. That works fine with superheroes, where we know their life between adventures is in a world like ours, but it’s a lot less satisfying when set in the world of Nehwon. 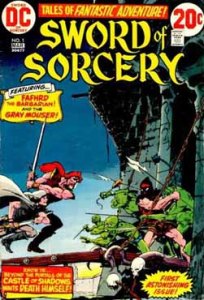 Last to appear but best of these three was Stalker, the tale of “the man with the stolen soul.” Written by Paul Levitz and drawn by Steve Ditko, it told the story of a kitchen wretch who sells his soul to the war god D’Grth for absolute mastery of weapons. He takes revenge on the people who’ve pushed him around but gets no joy from it — or from anything; with his soul gone, his emotions are gone too. He sets out to demand his soul back which requires fighting through D’Grth’s priesthood, only to learn after four issues that he’ll have to kill the god — and that requires killing every last worshipper. The series ended there, but had it lasted, that would have kept him busy (Stalker would later resurface in Justice Society Returns in which he’s learned that the only way to wipe out the worship of war is to kill all life)

A lot of the credit for this book goes to the art — Ditko does an amazing job showing things like World’s End Sea where the world literally ends (it’s a flat Earth). Levitz

writing is good and the setting is different: this is apparently an alien world settled by human colonists centuries earlier so possibly the magic is really super-science. While it’s definitely the best of these three, DC’s Warlord, which I’ll review down the road, was DC’s only successful sword-ad-sorcery comic of the era, lasting more than twenty years.

One response to “Swords and sorcery but without enough magic? Some DC comics”